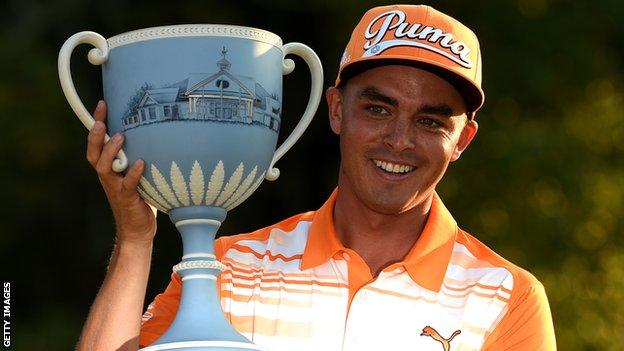 Rickie Fowler beat Henrik Stenson by one shot to win the Deutsche Bank Championship in Massachusetts.

The American, 26, closed with a three-under 68 for a 15-under-par total to claim his third PGA Tour title and move to fifth in the world rankings.

Stenson, who led overnight, was undone by a double bogey on the par-three 16th after hitting his tee shot into water.

Rory McIlroy's failure to finish in the top 10 means Jordan Spieth returns to the top of the world rankings.

Spieth missed the cut in Boston but the complex mathematical formula used to calculate the rankings sees the reigning Masters and US Open champion back at number one, one week after being usurped by McIlroy.

The Northern Irishman, who closed with a five-under 66 to finish tied 29th on three under, said he was more concerned about his form and moving up the FedEx Cup play-off standings.

"My focus the next few weeks is the FedEx Cup and to try to do well on that," McIlroy said.

"I'd love to play the next event well and get myself into the top five going to Atlanta. That's still the goal. I'll probably need a win."

Leading by two shots with five holes to play, Stenson was on course to repeat his Boston win of two years ago.

But he had to settle for a second consecutive runner-up finish after coming second in The Barclays last week.

Fowler cut the deficit in half with a 40-foot birdie on the 14th and then held his nerve as Stenson, who won the FedEx Cup in 2013, faltered.

The 39-year-old conceded he used the wrong club on the 16th and described the mistake as the "killer blow".

He also missed a 14-foot birdie putt on the last, allowing Fowler the luxury of two putts from 10 feet to win.

"I've been playing well the past couple of years," Fowler said. "It was just a matter of time before I knocked down the door."