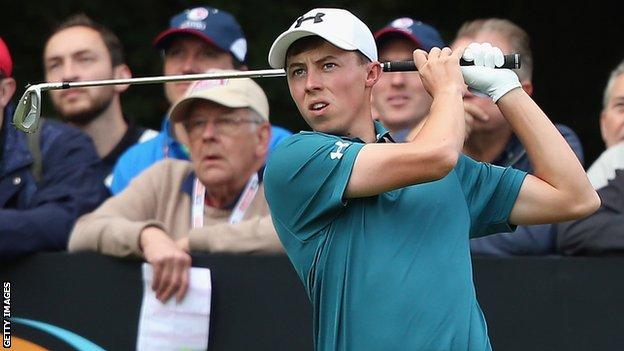 England's Matthew Fitzpatrick came through the field to take a first-round lead at the British Masters at Woburn.

Scotland's Marc Warren and Lee Slattery of England had led for much of the day with six-under rounds of 65, before Sweden's Robert Karlsson edged ahead.

However, Karlsson bogeyed the 18th to slip back to six under, while 21-year-old Fitzpatrick closed with two birdies for a seven-under-par 64.

The British Masters is back on the schedule for the first time since 2008.

Ian Poulter is the official host of the tournament at his home course and after shooting an opening round of 68, he said: "I'm very proud. There's a lot of work gone on behind the scenes."

Fellow Englishmen Luke Donald (67) and Lee Westwood (69) made solid starts, while Ireland's Shane Lowry and Padraig Harrington are well in contention at five under but it was Sheffield's Fitzpatrick who set the pace.

Six birdies and an eagle took the former US Amateur champion to the top of the leaderboard as he looks to build on three top-three finishes in his last seven events.

"Same again this week would be lovely," said Fitzpatrick. "It's a great start today and I just need to keep working hard on my game.

"It was a tough start to the year and I missed a few cuts in a row, although I felt like I was playing all right, but now I am playing decent and getting the results I am looking for."