The 30-year-old world number 85, who was seventh reserve, is the first Scot to win a WGC and had six birdies in a four-under 68 to finish 20 under.

England's Danny Willett equalled the course record with a 62 to take third.

American Jordan Spieth returns to world number one after finishing in joint seventh, with Northern Irishman Rory McIlroy a further shot adrift with 66.

It was Knox's first victory on either the European or PGA Tour, with the co-sanctioned tournament part of the European Tour's Race To Dubai.

Knox grew up in Inverness and attended Jacksonville University in Florida.

He took five years to reach the PGA Tour and the closest he had previously been to a title was losing a four-man play-off in the 2014 Honda Classic that included McIlroy and was won by Russell Henley.

The Shanghai success sends Knox to the Masters in April for the first time, along with the Hyundai Tournament of Champions. 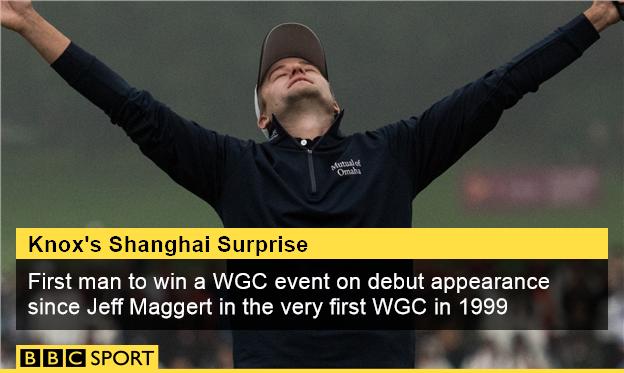 The Scotsman had chosen not to finish the third round on Saturday evening because of darkness. He returned in the morning chill to play the par-five 18th and hit a wedge to three feet for a birdie to tie American Kevin Kisner for the 54-hole lead.

In the final round he opened a two-shot lead with birdies on the 10th and 11th and rolled in a 10-foot birdie putt on the 16th to move a comfortable three strokes clear.

"I always thought I was going to win a big one as my first one but this is going to take a long time to sink in," he said.

Although the win gives him a European Tour exemption until the end of the 2018 season, Knox is not currently a member and is based on the PGA Tour in America.

This makes him ineligible for next year's Ryder Cup at Hazeltine but he said: "Obviously it's going to be a goal of mine to make the European Ryder Cup team.

"But I have no idea where I stand or what I need to do to make the team. But I look forward to finding out and giving it a run."

Spieth was three shots off the lead after the third round following a 63 but bogeyed the opening hole of his final round, with a 70 leaving him five shots behind Knox.

It was enough to depose PGA champion Jason Day at the top of the rankings, however.

World number three McIlroy, troubled by food poisoning before the start of the tournament, retained his lead in the Race To Dubai standings after carding seven birdies on the final day to finish in a share of 11th place.

American Dustin Johnson had moved to within one of the lead at the Sheshan International Golf Club. His third shot at the par-five eighth hit the flagstick and rolled off into the water, resulting in a double bogey. He finished in a share of fifth.

Kisner made birdie on the 18th for a 70 to claim second, his fourth runner-up this year, the other three being play-off losses.