Swede Kristoffer Broberg won his maiden European Tour title with a play-off victory at the BMW Masters in Shanghai.

After a four-under 68, the 29-year-old world number 149 birdied the first extra hole to defeat American Patrick Reed after both finished at 17 under.

Overnight leader Thongchai Jaidee had a 71 to finish tied third at 16 under.

Englishman Justin Rose was one further back after six birdies in a 67, sharing seventh place with compatriot Paul Casey, who bogeyed the last in a 69. 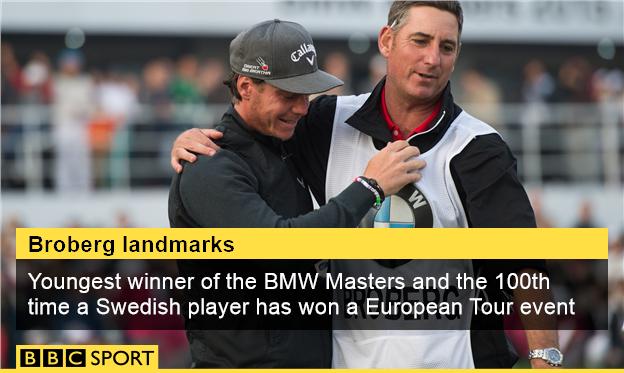 Reed held a one-shot lead with two holes to play after holing out from 100 yards from a fairway bunker for an eagle at the 15th and carding his fifth birdie of the day on the next.

However, the world number 17 bogeyed the 17th and left a birdie putt short from 12 feet on the 18th, tapping in for par before throwing his ball into the lake surrounding the green.

That left Broberg, who began the day two off the lead, with a birdie putt from similar range to move ahead - but he also left it short.

Jaidee and An - the final pair - both missed chances to join the play-off.

Broberg and Reed returned to the 471-yard 18th, where the American found thick rough off the tee, a greenside bunker with his approach and splashed out to four feet.

Broberg, playing in his 96th European Tour event, this time made no mistake with his birdie attempt to claim victory.

In the Race To Dubai standings, Danny Willett closed the gap on leader Rory McIlroy by finishing in a share of 28th place.

McIlroy leads by 1,613 points before next week's season-ending World Tour Championship in Dubai, where the winner will claim 1,333,330 points.