Former world number one Tiger Woods says he has "nothing to look forward to" in his recovery from back surgery.

The 39-year-old 14-time major winner has not swung a golf club since operations in September and October.

Asked about his return, he said: "I've no answer. Neither does my surgeon or physio. There's no timetable.

Woods had two operations to alleviate pain from a pinched nerve.

Revealing that he has spent most of his time playing video games, the American said he had not done any rehabilitation work on his back and that physical activities were limited.

"It's different from the other surgeries I've had in the past. For nerves there are really no timetables."

Woods, who turns 40 on 30 December, missed the cut at three of the four majors this year and played in only 11 events. He remains on 79 PGA Tour victories.

He played only seven tournaments in 2014, having missed three months of the season after surgery on a pinched nerve in his back in March 2014.

"For my 20 years out here I achieved a lot," he said. "I think pretty much everything beyond this will be gravy. If that's all it entails then I've had a pretty good run. But I'm hoping that's not it.

"I'm hoping I can get out here and compete against these guys. I really do miss it."

He has been named as one of United States captain Davis Love III's assistants for the 2016 Ryder Cup, but said he still hopes to make the team.

Woods has played in seven Ryder Cups, the most recent in 2012 under Love's captaincy.

World number three Rory McIlroy gave Woods his support, posting on social media: "Wishing my idol and friend a speedy recovery. Golf without him doesn't bear thinking about. Hope to see you back on the course soon @tigerwoods."

This is the bleakest picture Woods has ever painted of one of his injuries. He just has to wait for it to heal and it's clearly not done that so far.

He's still saying that he wants to be there at the 2016 Ryder Cup as a player, but with no timetable with regard to his rehabilitation you have to wonder when, and if, he'll come back from this.

If I was a betting man, my money would be on him sitting on a buggy and not having his clubs anywhere near Hazeltine, not just on fitness but on form as well. It's going to be an awful long way back if he's going to make any kind of comeback. 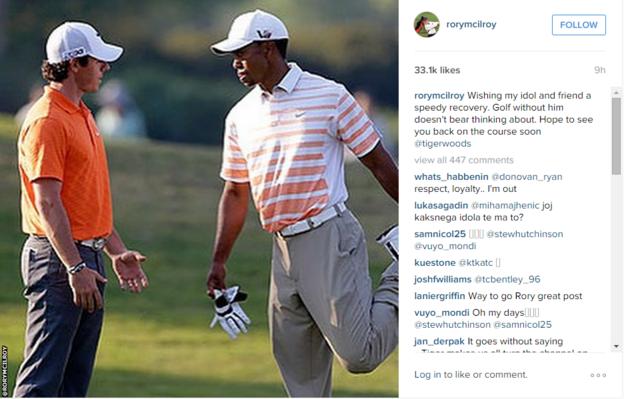