Imagine Earl Woods choosing to put a baseball bat rather than a golf club into the hands of young Eldrick, his toddler son.

How different would golf be if Tiger Woods, who turns 40 on 30 December, had chosen to play something else?

As the ailing 14-time major champion struggles to swing a club again, he can celebrate this landmark birthday by reflecting that no-one has had a bigger impact on the game.

Would modern-day golf be as athletic or back in the Olympics without his influence? "I doubt it," European Ryder Cup captain Darren Clarke told the BBC.

"All sports progress, all sports move forward. Tennis has changed immensely as well over the years.

"But golf was somewhat slower to adapt to all that stuff. With all the technology we have now, fitness has become a huge part of it and I think Tiger led the way."

The 47-year-old Clarke has played most of his career with Woods as a great friend and rival.

"Because he played so well, so consistently, everybody was trying to figure out what he did. Whatever he was doing was right, so he led the way on many fronts," the 2011 Open champion added.

Another of those fronts was Woods' economic impact. In 1996, when he burst on to the scene, PGA Tour purses totalled more than $100m for the first time.

In the previous six years they had grown at a rate of 3.4%. Then Woods won the 1997 Masters by an astonishing 12 strokes.

It was the big bang moment, the first of 14 major triumphs for the then 21 year old.

The last of those came at the 2008 US Open and by then the PGA Tour schedule was worth $292m. Prize money inflation ran at 9.3% in that period.

"The results are astonishing," said American political scientist Roger Pielke Jr, who carried out extensive research into what he termed the "Tiger Woods effect".

"Tiger effectively more than doubled the prize money for every other golfer, adding billions of dollars to fellow players' pockets."

Woods' greatest rival has been five-time major champion Phil Mickelson, who fully appreciates the way this trailblazer brought so much more money to golf.

"It's unbelievable, the growth of this game - and Tiger has been the instigator," Mickelson said.

The decade of domination

Players may have been richer but many were shattered by Woods' brilliance during his years of domination.

Colin Montgomerie insists one of the reasons he never won a major was that his opportunities were so limited by the prolific American. An in-form Woods only needed to turn up to win the biggest titles.

There was a sense of inevitability at the 2001 Masters when he completed a two-stroke win over David Duval to hold all four majors simultaneously.

No-one else has achieved such a feat and the run began at Pebble Beach in 2000 when Woods won his first US Open with the greatest golf ever played. He was the only man to break par on a course considered too tight for his driving game.

Woods put that erroneous notion to bed with a brilliant opening 65 before finishing 15 strokes clear of the field.

How much higher might those figures have been had Woods not beaten these players so regularly and so convincingly? Add to the list Spain's Sergio Garcia, surely a major champion in any other era.

Following the Pebble Beach triumph, Woods claimed the Open at St Andrews by eight strokes and repelled the plucky Bob May in a play-off to land the PGA at Valhalla. He held all four majors with an average winning margin of 6.5 strokes.

The inspiration for a new generation

"He was a phenomenon," Clarke said. "He was the young kid coming out to show us what he could do.

"I'm certainly very fortunate to have played in his era."

Woods was golf's poster boy. He was different - a black man in an overwhelmingly white sport - and he became the inspiration for the players who populate the top of the current world rankings.

"What Tiger Woods has done for golf, I'm not sure anyone would do again," four-time major champion Rory McIlroy told the BBC.

"Not just how unbelievably talented he was, but what he stood for, where he came from. He brought a whole new demographic into golf and sort of made golf cool again for kids."

McIlroy, along with fellow top-three stars Jordan Spieth and Jason Day, are prime examples of the excellence and athleticism Woods brought to the game.

At the height of his powers Woods transcended golf and was the biggest sports star on the planet. He was capable of superhuman achievements like winning the 2008 US Open while suffering a broken leg.

Despite his rather reluctant and dour public persona, Woods seemed untouchable in every respect.

The fall from grace

Apparently happily married with two beautiful children, once his leg was fixed, he would surely go on to smash Jack Nicklaus' record of 18 major victories. He was only 32 with a long career of continued domination ahead of him.

A year later, though, he stumbled to defeat by YE Yang at the PGA at Hazeltine. Woods had never before been beaten from the front in a major and his aura was severely shaken by the unheralded Korean.

He was also hiding the secret of a string of extra-marital affairs that dramatically became public knowledge after he crashed his car on Thanksgiving night just three months later.

It was a shattering fall from grace and although he returned to the top of the world rankings in 2013 he has failed to add to his major tally. He was never again the same irresistible golfing force.

His body bares the scars of decades of hard physical training. He prepared like an athlete and athletes are usually competitively finished when their 40th birthday comes around.

Woods will probably heave one of those middle-aged sighs as he climbs out of his seat to blow out the candles. After three back operations in the past 19 months he waits to see whether he will swing a golf club in anger again.

The long road back

"Come on, I'm not retired. I'm not done yet," Woods protested during his recent World Challenge Tournament in the Bahamas. 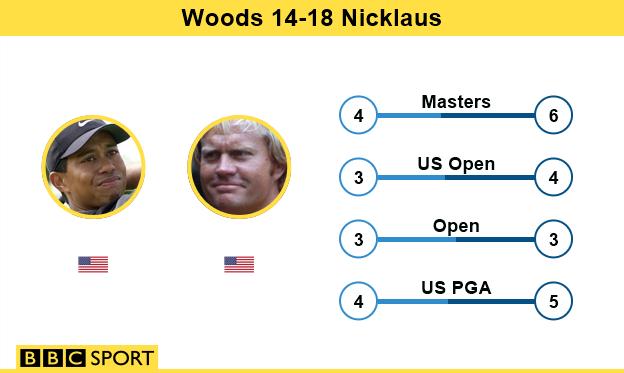 He was responding to a widespread interpretation of an earlier news conference at which his uncharacteristically frank answers suggested his career might be over.

"I know there will be a time when I will get to rehab, get to start working out again, and I'll do everything I can to get back out here."

Down to 416 in the world rankings, Woods is largely confined to his sofa. He talks, though, of wanting to win more tournaments, adding to a list of 79 PGA Tour victories and to be a playing vice-captain at the next Ryder Cup.

The record books suggest a golfer's life is far from over at 40. Vijay Singh, one of the few players to muscle in on Woods' 623 weeks as world number one, won 22 times after his 40th birthday.

Ben Hogan, who overcame the effects of a car crash that nearly killed him, won the next three majors after reaching that age in August 1952.

Nicklaus had five wins after that landmark, including the three majors that took his tally to his record of 18.

And it is Nicklaus to whom Woods has most regularly been compared. But their sporting vocations have differing characteristics.

"He won his major championships over 24 years, spanned three generations, but Tiger Woods dominated in a way that had never been done before and will never be done again."

Chamblee has been one of Woods' biggest critics, particularly regarding the swing changes that marked the latter part of his career.

But this eloquent former PGA Tour pro tellingly concludes: "In my estimation, you'd have to give the edge to Tiger Woods as the greatest player of all time."

It feels as though marking this great champion's 40th birthday has involved writing his golfing obituary.

After all, it is only a month since Woods said: "For my 20 years out here I think I've achieved a lot, and if that's all it entails, then I've had a pretty good run."

He is the master of understatement. "Pretty good run" doesn't come close to describing such an astonishing career.

Undoubtedly the sport owes Earl Woods a huge debt for pointing his son in the direction of golf because the sporting life that resulted massively changed the game for the better.

But is that it? Is he done, before the flames on those 40 candles are extinguished? Woods is surely not alone when he added: "But I'm hoping that's not it."