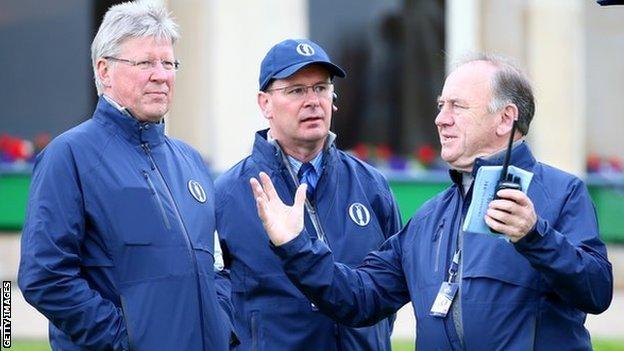 Golf cannot be complacent about the possibility of being hit by a betting scandal, says the sport's governing body.

In the wake of recent problems in tennis and cricket, new R&A chief executive Martin Slumbers has admitted that inappropriate gambling is a subject moving towards the top of the agenda for golf's authorities.

The 54-year-old spoke to BBC Sport in his first major interview since taking over at the St Andrews-based governing body last September.

He was cautiously optimistic regarding golf's return to the Olympics, said the game must do better at attracting young players and addressed the issue of controversial US presidential candidate Donald Trump's ownership of Ayrshire golf-course Turnberry.

His comments regarding the hot topic of betting irregularities were most striking. Only last week European Tour chief executive Keith Pelley said there was absolutely no concern over the issue in golf. Slumbers, though, is striking a more vigilant note.

"We have not been made aware of any evidence yet of the type of issues currently being discussed happening in the game of golf," Slumbers said.

"That doesn't mean we are complacent about it. Anything where you have inappropriate betting actually undermines that sport. So it's something we are keeping our eye on very closely and we are looking at the implications."

There are already protocols in place requiring European Tour players to sign a declaration preventing them from betting on golf. This also applies at The Open.

Slumbers believes the authorities are well equipped to police the issue. But in light of the recent publicity in tennis, among other sports, he admitted the subject was a high priority for golf bosses.

"I think the events of the last few months will bring it more to the top of those agendas, yes," he said.

"If there was evidence starting to build of inappropriate betting, the game is run by some very responsible and sensible people who have the game at heart and I'm sure will do the right thing. We are certainly keeping this under careful attention.

"I'm sure if we have to go further, we will go further because inappropriate betting will undermine sport," Slumbers added.

Olympics exposure must not be wasted

The former banking executive, who worked alongside the retired Peter Dawson during his last six months in the job, takes over as golf prepares to return to the Olympics in Rio this summer.

It is being viewed as a massive opportunity for the sport to grow on a global scale. So, how much will the sport be strengthened by returning to the Games?

"Hopefully very much stronger," Slumbers said. "I'm always amazed every four years when the Olympics comes along at what sports I watch. So there will be a lot of people out there who will say 'right let's watch the golf,' and that exposure to hundreds of millions or billions of people watching the Olympics could be fantastic.

"But we mustn't be complacent, either. There are probably a number of sports that have been in the Olympics that haven't had a long-term surge in participation from it.

"We are now focused on two things. One is making sure the event itself is a great success, and the IGF [International Golf Federation] is doing some huge work in that regard, and then how do we build on that through to 2020 and beyond?"

For Slumbers the biggest challenge is "to actually capitalise on the Olympic enthusiasm that will arise".

"But we mustn't let that enthusiasm die," he warns.

Slumbers is also aware that the enthusiasm for golf among the younger generation should not be dimmed by an old-fashioned stuffiness that he accepts remains prevalent in the sport.

He suggests tournament's like last week's event in Abu Dhabi, where Rickie Fowler edged home against the likes of Rory McIlroy, can have a big impact.

"That's a great image that I think attracts a lot of young people," he said. "I think this is a sport that could be, and should be, more relevant to younger people to come out and play.

"Part of my role is to try and encourage and develop more accessibility for youngsters to be able to play golf.

"We can always do things better. There are many facilities out there that are attracting that young gentleman or young lady. But can we do that better? Yes we can."

For a moment he sounds like US president Barack Obama - which brings us neatly to the R&A's relationship with the man who wants to be Obama's successor in the White House.

Donald Trump owns Turnberry which last hosted the Open in 2009. The US presidential candidate is pouring £200m into the project but is nowhere near as politically correct as golf is trying to be at the moment.

Following the outrage sparked by the presidential candidate's comments on Mexicans and Muslims, can golf do business with him?

"My belief is that golf should be open to all, regardless of gender, race, nationality or religion. I think that's a strength of this game."

But is that at odds with taking The Open to a Trump-owned Turnberry? Slumbers dodged the question by stating the championship could not go to the Ayrshire course until 2022 at the earliest.

"That's something we don't have to consider for a couple of years yet," he said. "The world may change quite a lot in the next six years and we will consider it at that point."

Slumbers is clearly not afraid of change, as he indicated with his response to the European Tour last week relaxing its dress rules, allowing players to wear shorts in practice.

This move couldn't happen at this year's Open because the conditions of entry have already been set, but might occur at a later date.

"I don't think golf should be frightened of making sure it is modern and relevant," Slumbers said. "The climatic conditions of the Middle East were slightly different to Scotland in July.

"I think it would be wrong in the tournament itself. The real balance is preserving the integrity, the history of the game but also staying modern and relevant.

"So I think it is something we will keep talking about, maybe for practice days for the future."

That such an issue could be considered in the famous old R&A clubhouse offers further evidence of a modernising shift that, dare I say it, is worth betting will accompany Slumbers' tenure at St Andrews.