Rory McIlroy believes he can "retire happy" if he wins the Masters this week at Augusta.

The coveted green jacket presented to the champion is the only big thing missing from his impressive golfing CV.

McIlroy, about to play in his eighth successive Masters, has won the sport's other three major events, and wants to complete the set, which only a handful of golfers have achieved.

"If I can win a green jacket and become just the sixth player in history to win a Grand Slam, then I would retire happy knowing I have joined an exclusive list," said the world number three.

"Every year I go to Augusta and haven't won, the pressure will build and build. Hopefully I can get that little monkey off my back, and then I'd just free-wheel it after that."

Twelve months ago the pressure on McIlroy pre-Masters was intense, not just from the golfing public and media, but from himself. 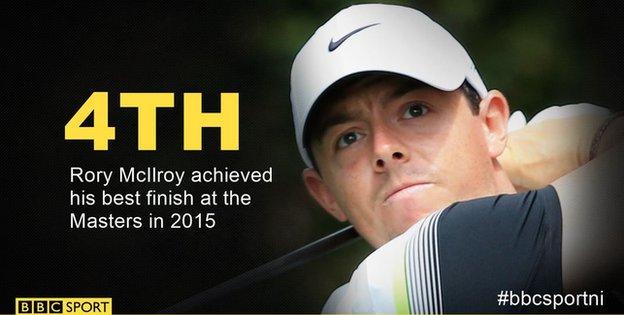 In 2014 he had won the last two majors of the year, the Open and US PGA, and the main story line during the next seven months was McIlroy's possible Slam.

Still, under the microscope, he ended up recording his best ever finish of fourth behind American Jordan Spieth. He ended up on a scoreline of 12 under par, which would have been good enough to win the tournament on the previous three occasions.

McIlroy, who turns 27 next month, thinks he arrives at Augusta this week slightly more under the radar then usual, and better prepared for the challenge.

"I feel a year on from the hype that surrounded me, I will know how to deal with it better. Having that experience will definitely help me this time," he said.

No Irish golfer has ever triumphed at Augusta, but McIlroy has come close before.

In 2011 he led the tournament by four shots going into the final day, before a high profile collapse and a fourth round of 80.

But last year's final two rounds give much reason for optimism. McIlroy plotted his way to his best two back-to-back rounds of 68 and 66, the last one bogey free - certainly encouraging statistics on a course where experience can be crucial.

McIlroy's form this year, by his own admission, has been low key, but he believes his game is not far away from clicking at the right time. The script line of achieving a Grand Slam is the same, but the approach feels different.

He has played more events in the build up to try and peak at the right time, opted not to arrive early but treat the Masters like any other tournament, and decided to opt out of the traditional Wednesday Par Three event.

McIlroy's preparations for the main event started in spectacular fashion with a hole-in-one at the par-three 16th. If practice rounds are an indicator of form then he's shaping up very nicely for the tournament.