Danny Willett felt fate played a part in him becoming Masters champion after a remarkable final round at Augusta.

Willett's wife Nicole had been due to give birth on Sunday, but Zachariah James Willett arrived 12 days early on 30 March to allow him to play.

"My wife was born 28 years ago on Monday and my son came early," said Willett, who won by three shots after Jordan Spieth's dramatic capitulation.

"You talk about fate and everything that comes with it. It's been crazy."

The 28-year-old took advantage of defending champion Spieth dropping six shots in three holes to win his first major on five under.

American Spieth, who was seeking back-to-back Green Jackets, finished tied for second alongside Willett's compatriot and playing partner Lee Westwood on two under.

"On this rare occasion I'm nearly speechless," added Willett, who moves up to ninth in the world rankings. "It's been a fantastic week on and off the golf course.

"It's been one of those crazy weeks where things seem to go your way. The 80th Masters is always going to be special and dear to my heart.

"People were saying 'Try to bring the Green Jacket home for the little man'. It's a bit big but I am sure he will grow into it."

"You can't really describe the emotions and feelings," added Willett, who started the day on level par.

"We all try to play good golf and someone has to win and fortunately today it was my day.

"Every time we seemed to make ground, Jordan kept pulling ahead. We kept trying to dig in. I thought we had to get to seven under and we looked up and Jordan was already seven.

"It was a very surreal day when you look back at the ebbs and flows."

"This isn't a shock win, Danny Willett has been playing great for two years now. Gave Rory a run for his money in Race To Dubai last year." - England's former world number one Luke Donald.

"Danny Willett well done that man.... And a new baby that was due today... The name Augusta sounds pretty good." - Ryder Cup star Ian Poulter, who finished in a tie for 49th.

"Enjoy tonight Danny Willett get down the local in your Green Jacket when you're home for a pint of mild." - Yorkshire and England bowler Tim Bresnan.

"Not often we've been able to say it but an Englishman is Masters champion. Congratulations Danny Willett." - Former England striker Michael Owen.

"What a round by Danny Willett! Always good to see an English winner! Masters champion!" - Tottenham and England striker Harry Kane.

"And now Jordan has to give him the jacket? Brutal." - British tennis player Laura Robson. 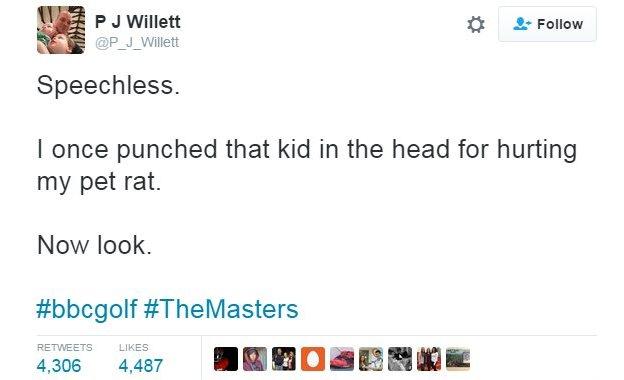 What do his former coaches think?

Peter Ball, who coached Willett between the ages of 12 and 16, told Radio 5 live: "I had my heart in my mouth watching him, wishing every putt in.

"It is amazing, I'm so proud of the young man. He was one of a number of young people who turned up, but he wanted to practise more and his drive and determination was amazing.

"We went down to the Ryder Cup and Danny was on the bus with me and we went on the practice area to meet some of the players and he said 'I would like to be here one day' and he is here. Absolutely amazing."

James Hobbs, Willett's coach at Jacksonville State University, said: "He came at 17, he was an immature young man and we got him playing competitive golf and introduced him to fitness and working out to build his strength.

"We gave him a great course to practise on and basically Danny will agree it was a platform where he could launch his golf career."