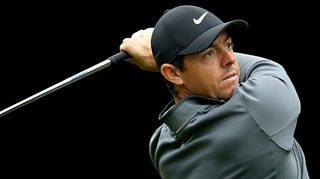 Rory McIlroy says he plans to conserve his energy after taking the lead on day two of the PGA Championship.

McIlroy, whose win at Wentworth in 2014 sparked a run of success that included the Open Championship and US PGA titles, hopes victory this year could have a similar impact.

"My putting has been really good. I've taken advantage of the opportunities I've given myself and that's been a big key to way I've played this week," said the world number eight.