Bjorn's side is starting to take on a more cosmopolitan feel thanks to the form of Francesco Molinari and Alex Noren.

The Italian and the Swede were victorious on either side of the Atlantic and are now the highest ranked continental Europeans behind Spain's Jon Rahm.

Molinari's blistering victory at the Quicken Loans National actually had zero impact on the Ryder Cup qualifying tables. But Bjorn cannot ignore the Italian's second win of the year, given the way it was compiled.

Molinari chose to put FedEx Cup points ahead of his quest to return to the Ryder Cup. He eschewed the French Open, won by Noren, at Le Golf National which will stage this year's match against the American holders.

Within the Ryder Cup context, it was a brave move for the Italian who won the BMW PGA Championship at Wentworth in May. That victory put him on track to return to the European team with a weighty collection of order of merit points.

But Molinari knew that playing on the PGA Tour in the week of the French Open would do nothing for his qualifying position. World ranking points won at US tournaments taking place at the same time as European Rolex Series events do not count on the Ryder Cup table.

"It wasn't an easy decision," said Molinari, who missed out on the lucrative Tour Championship by a single shot last year. "I thought until the last minute whether to go to France or to come here but it seems like it was the right choice in the end.

"I came here obviously because I was right on the bubble in the FedExCup and I wanted to gain a better position, so I guess job done. It was [a big risk], but the risk on the other side was that I was 123rd on the FedExCup. 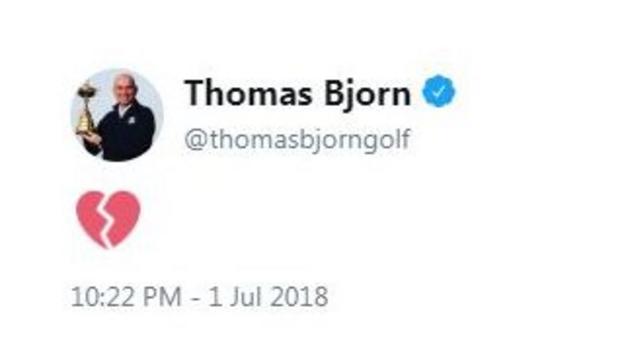 "When you play two tours, you need to balance the two things."

If Molinari retains the form he showed in Washington through the rest of the summer he will qualify for the European team at a canter. And if he is in need of a wildcard pick, Bjorn will surely remember how the 35-year-old from Turin demolished the field last week.

It was a devastating spell that removed all doubt against a field that was admittedly not the strongest. The line-up at the French Open, where Noren completed another of his come-from-behind triumphs, was more formidable.

The Swede pointed out the need for Molinari-like accuracy and ball-striking at Le Golf National as key qualities. "Just hit the fairways," the 35-year-old said.

"Hit enough fairways and just in the rough, like a little bit, but you need to be quite straight off the tee."

And while Molinari's win was impossible for Bjorn to ignore, Noren has taken a giant step towards his Ryder Cup debut with his seventh win in the past four years.

It does him no harm at all that it was achieved on the course where Europe will try to win back the Ryder Cup on 28-30 September. "If I would be on the team it would mean a lot," Noren said.

"You get good memories from here. The first two years I came here I thought I could never win around here and the last three years I've had good results. It helps a lot."

This week the European Tour embarks on its 'links swing' with the Irish Open at Ballyliffin to be followed by Gullane's Scottish Open and the Open Championship at Carnoustie.

It is another thrilling sequence of tournaments with big money and Ryder Cup points up for grabs.

Rory McIlroy and Rahm headline the Irish field and will be keen to emulate the form of Molinari and Noren to put stuttering seasons back on track and to consolidate their own Ryder Cup positions.

And be assured, Bjorn will be watching closely. After all, having tweeted a broken hearted emoji to mark Denmark's World Cup exit, he does not have to worry any longer about the football.