World number five Lexi Thompson will miss the British Open next month so she can "recharge" her "mental batteries".

In a social media post, the 23-year-old American said the past 18 months have taken a "tremendous toll".

In March, Thompson said she still had nightmares about the four-stroke penalty which cost her victory at the ANA Inspiration in April 2017.

"I realised recently that I need to take some time to work on myself," she wrote on Instagram.

"I am therefore taking this time to recharge my mental batteries, and to focus on myself away from the game of professional golf."

The British Open - one of five majors - starts on 2 August at Royal Lytham.

Thompson said she hopes to return to defend her title at the Indy Women in Tech Championship, which starts on 16 August.

She was left in tears after being penalised while leading the final round of the ANA Inspiration - the first major of the season - although the incident prompted a rule change. She lost the play-off to Ryu So-yeon.

"The events of the past year and a half (on and off the golf course) have taken a tremendous toll on me both mentally and emotionally," Thompson said.

"It is extremely difficult for me not to play in this prestigious major." 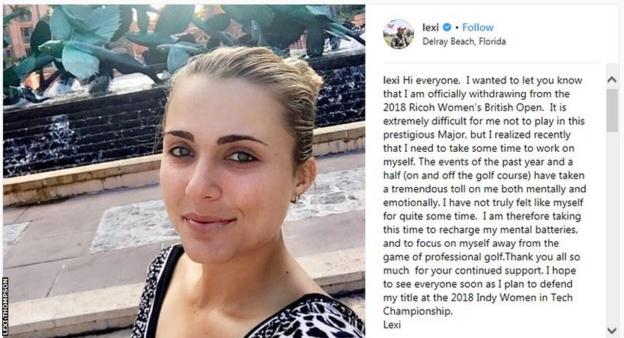