In the time between the 2008 US Open and Sunday's triumph at the Masters, Woods has gone through a series of highs and lows.

The American started just 24 events in a four-year period. A public admission of infidelity and the breakdown of his marriage led to him taking a break from golf.

The former world number one returned but then had injuries and back surgeries, slipped down the rankings, and even thought his career was over. His off-course problems also continued when he was arrested on suspicion of driving under the influence in 2017.

Here is how his fellow sporting greats, politicians and Hollywood actors reacted on social media to the "greatest comeback story in sport".

Woods had spinal fusion surgery in April 2017 and has had four back surgeries in his career.

Twenty-three time Grand Slam tennis champion Serena Williams has struggled with injuries throughout her career and has twice suffered a pulmonary embolism.

"I am literally in tears watching Tiger Woods, this is Greatness like no other," the American tweeted. "Knowing all you have been through physically to come back and do what you just did today? Wow. Congrats a million times! I am so inspired."

Six-time NBA all-star Stephen Curry called Woods' victory "the greatest comeback story in sports" and asked Woods if he could "hold one of those five jackets one time!"

Former basketball player Magic Johnson posted that "the roar of the Tiger is back" while Tom Brady, who won a record sixth Super Bowl in February, spent the evening "running the numbers on how long it'll take me to get to 15". 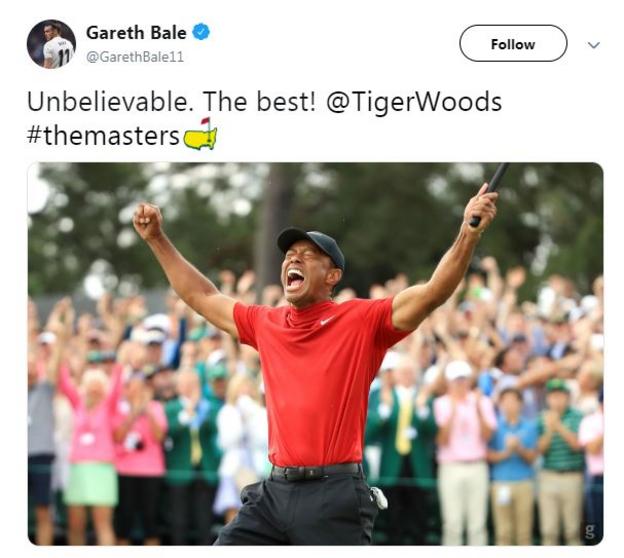 Then those glued to the TV...

Former US President Barack Obama, who played a round of golf with Woods during his time in office, paid tribute to Woods' determination after a difficult few years.

"To come back and win the Masters after all the highs and lows is a testament to excellence, grit and determination," he wrote.

US President Donald Trump said he loved "people who are great under pressure. What a fantastic life comeback for a really great guy!"

The best? Leicester winning the Premier League title in 2016 as huge underdogs, of course. "There's something in my eye," Lineker tweeted. "To use a phrase once used before about Tiger Woods - 'Oh my goodness...Wow....In your life have you seen anything like that?'"

Former tennis world number one Chris Evert said: "Tiger has shown us all that you can always come back, in sport and in life, if you put in the work".

Legendary former England cricketer Ian Botham called Woods' victory "one of the biggest inspirational performances... Who said he wouldn't win another major... no. 15 and more to come".

Australian actor Hugh Jackman was also keeping an eye on proceedings in Augusta... 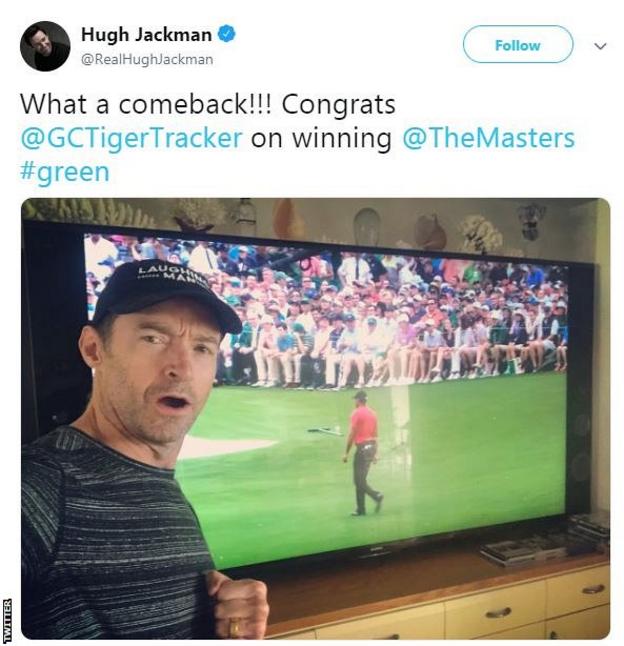 And then Woods' fellow golfers...

Woods' former coach Butch Harmon told Sky Sports: "I've never seen him show emotion like that. At any time, anywhere, any time in his life.

"He was humbled by his own mistakes, the things he went through he created, nobody else created them, and he came out the other side.

"He got himself help, he got his body right, he got his head right and he went to work on his game. I couldn't be happier for him and his family."

Phil Mickelson said of his long-time rival Woods: "I'm so impressed by his incredible performance and I'm so happy for him to capture another Green Jacket. Truly a special day that will go down in history".

Eighteen-time major winner Jack Nicklaus tweeted he was "so happy for him and for the game of golf. This is just fantastic," while Bubba Watson said he was "thankful to get to see that in person" along with the hashtag #Needs 4 more majors.

The European Tour put Woods' road to his 15th major title into perspective... 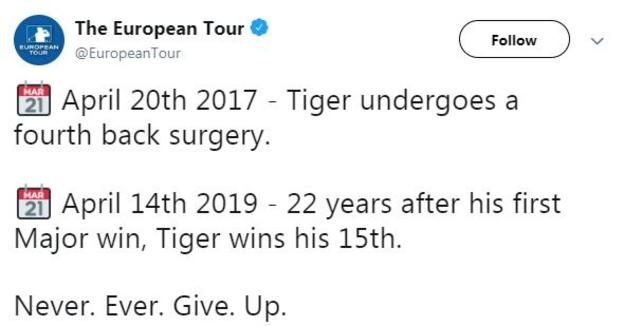 England's Ian Poulter, who finished with a share of 12th, wrote "A couple of mistakes were very costly today. But a day we will remember as @tigerwoods comeback incredible. What he has done for the game of golf can't be quantified. We all owe a lot to him for that. Respect. Enjoy number 15 Mr Woods."

And a reminder of where it all began...

The first person Woods ran to after sinking the winning putt was his son, Charlie. Twenty-two years ago, Woods' father, Earl, had embraced him as he claimed his first Masters victory. 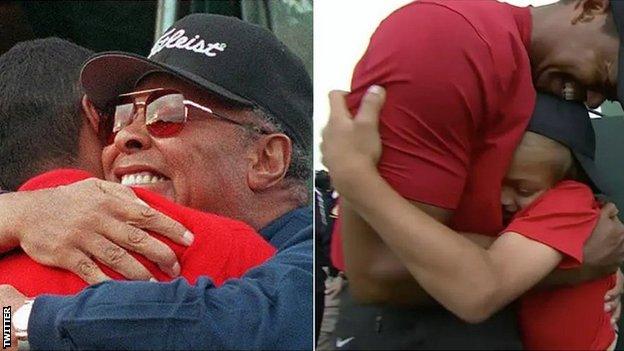 And one Twitter account shared the letter that Earl wrote to his 21-year-old son after he became the Augusta champion. 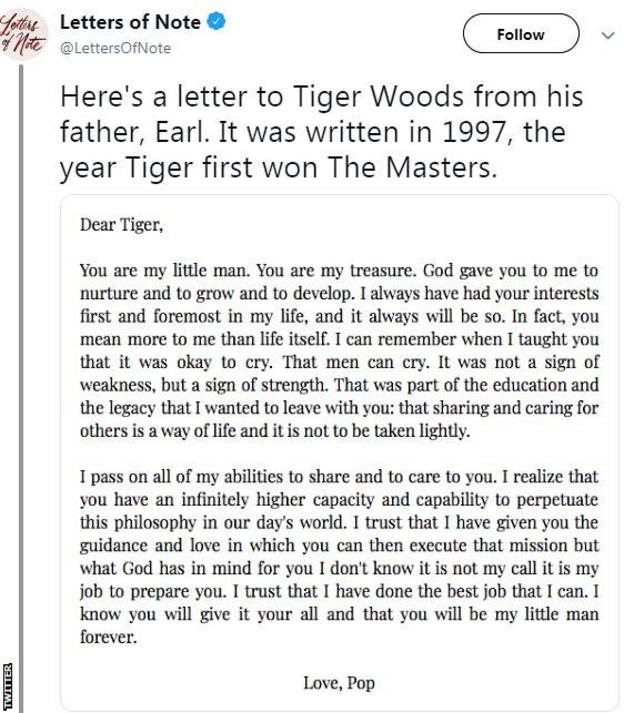