Defending champions Europe take a 5½-2½ lead over the US into day two of the Solheim Cup despite a controversial ruling benefitting Nelly Korda in Ohio.

The American had a putt stop on the edge of a hole and Madelene Sagstrom was penalised for picking up the ball too early and thus lost the hole.

Korda and Ally Ewing went on to win the afternoon fourball match by one hole.

However, Europe drew that second session 2-2 to retain their advantage after dominating the morning foursomes.

Anna Nordqvist and Matilda Castren claimed their second point of Saturday with a comfortable 4&3 victory over Lexi Thompson and Mina Harigae.

Jennifer Kupcho and Lizette Salas recorded a final-hole win against Carlota Ciganda and Sophia Popov to win the US' second match but Georgia Hall and Leona Maguire beat Yealimi Noh and Brittany Altomare by one hole.

Unlucky for some - US benefit on the 13th hole

It was the fourball encounter between Nelly Korda, Ewing and the European pairing of Sagstrom and Nanna Koerstz Madsen that proved the biggest talking point of the opening day of three. Their match was all square when rule 13.3 came into play and handed the Americans the advantage.

Korda's eagle putt did not drop and Sagstrom picked up the ball to concede the birdie. Europe then holed their own birdie putt to halve the hole but as they were walking off the green, a rules official informed them that Korda's eagle would stand because Sagstrom had moved the American's ball too quickly.

Without any appeal or prompting from the US team, the official decided that part of the ball had been overhanging the hole and the rule states that a player must be given 'reasonable time' to reach the hole and 10 seconds to see if the ball drops.

Sagstrom said to the rules official: "But it was never going to go in."

The official replied: "It doesn't matter, you didn't wait 10 seconds."

Sagstrom, playing partner Nanna Koerstz Madsen and Europe captain Catriona Matthew continued to argue that the ball was not going to drop in, but the ruling of the on-course official was confirmed after studying television footage of the incident.

Rules official Annie Giangrosso later clarified the ruling saying: "When the European player picked up the ball, per the rules of golf, it was pretty cut and dried. That shot Nelly hit was actually holed.

"We had Joao Pinto, an LET official, looking at it after the match referee called it in. It was a pretty quick clear-cut decision that the ball was over-hanging the hole."

Matthew described it as an "unfortunate incident" but said she felt the "fuzzy pictures" she saw were "inconclusive".

She added: "I 100% believe Madelene did not think the ball had any chance of going in the hole and I don't believe Nelly or Ally thought it was going in either.

"There was no reaction when Madelene threw the ball to them. It kind of mars such a great day of golf."

After the match, a clearly emotional Sagstrom conceded she had not followed the rules - she picked up the ball after seven seconds - but she still felt aggrieved by the decision.

"I do believe in integrity and honour the game of golf. I would never pick up a putt that had a chance to go in," she said on Sky Sports.

"I personally don't agree with the decision of the ball being on the edge [of the hole] but I didn't follow the 10-second rule, so it sucks right now because I feel like I let my team down."

World number one Nelly Korda added: "That situation was unfortunate and you don't want to win a hole like that. We had no say in it. It was all up to the rules officials."

Visitors repel US fight back

While huge roars accompanied every sweetly struck American shot or holed putt, by the time Korda and Ewing had won their first full point, Nordqvist and Castren had already helped themselves to a point.

The European pair continued where they had left off in the morning foursomes and while Thompson wonderfully chipped in on the third to draw the match level the Scandinavian duo won two of the next three holes.

A brilliant approach out of a fairway bunker on the 10th helped Nordqvist make her third birdie of the round and her fourth on 13 ensured they were never in danger of being reeled in.

And had Ciganda not missed a five-foot putt to win the 17th, Europe's lead might have been greater.

But the Spaniard and Germany's Sophia Popov eventually lost a match in which they had been two up after seven holes.

Thankfully for Catriona Matthew's visitors, who are looking for only their second win on American soil, Hall and Maguire won a see-saw final fourball in which they led and trailed before the English world number 29 intervened with birdies on the 10th and 15th holes. 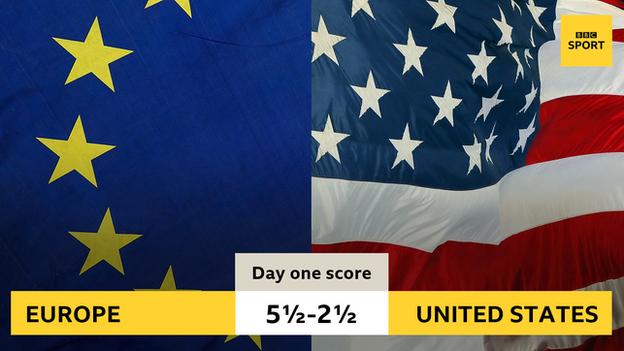 Mel Reid and rookie Maguire inflicted a first Solheim Cup defeat on the Korda sisters as Europe dominated the opening foursomes in Ohio.

Reid and Maguire's victory felt like a massive blow, against the US' "golden pairing" of Nelly Korda and her sister Jessica, who had asked their captain Pat Hurst to pair them together after they won both their alternate shot matches at Gleneagles in 2019 by wide margins.

The European pair took an early two-hole advantage but, roared on by a vociferous home crowd, Jessica chipped in on the 13th to close the gap before Maguire closed out the win on the 18th.

"I couldn't have asked for a better start to my Solheim career," Maguire said.

"I think everybody had written us off, and we just sort of took that in our stride and wanted to be as relentless and fearless as possible, and I feel like we did that."

Women's Open champion Nordqvist and Finnish rookie Castren set the tone with a battling victory, winning the first European point against Danielle Kang and Austin Ernst. They were two up after four but trailed by one after nine holes. However, they won three holes on the trot from the 13th to restore their lead and held on for the win.

The hosts had appeared set to get back on level terms with Ewing and Megan Khang two up with two to play against Hall and Celine Boutier, who were unbeaten at Gleneagles in 2019.

However, Hall holed from 15 feet for birdie to win the 17th and a par was good enough on the last because Ewing nudged a three-foot putt to win the match past the hole.

And Charley Hull and Emily Pedersen fought back to beat Thompson and Altomare as Europe began with a flourish.

Hull and Pedersen superbly recovered from two down with four to play, making birdies at the 15th and 16th before a match-winning three from the Dane on the 18th. 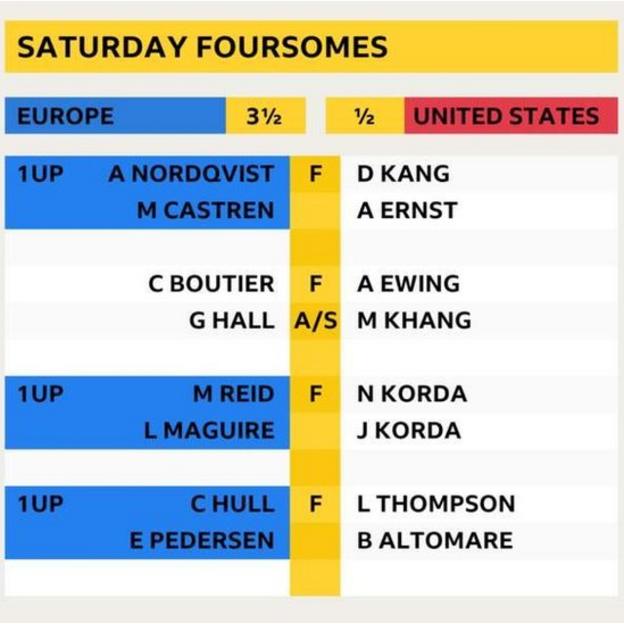 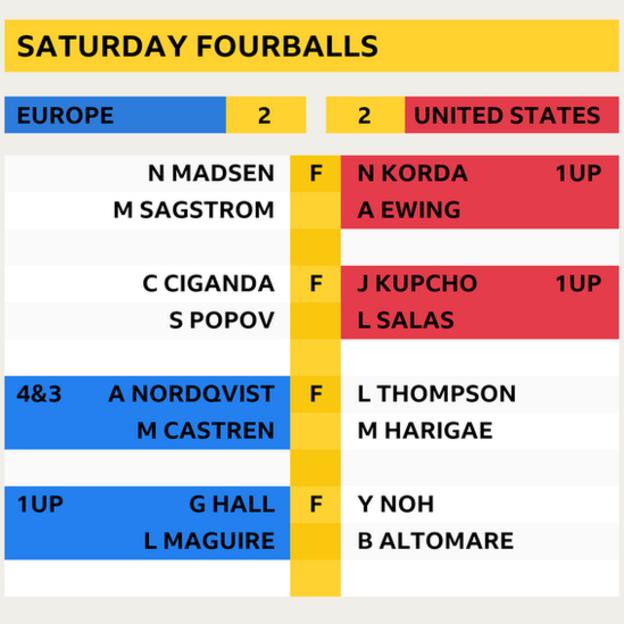 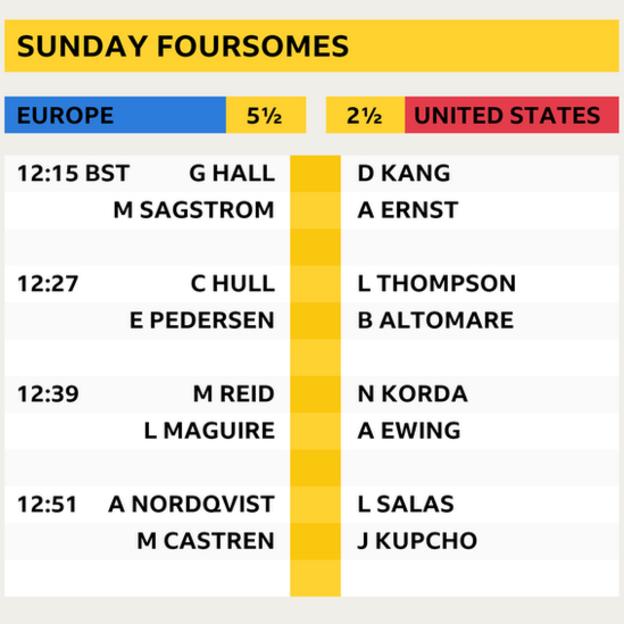