Europe held off a United States charge to take a 9-7 lead into Monday's Solheim Cup singles matches in Ohio.

On a sensational day at Inverness Golf Club, the US dominated the foursomes 3-1 to reduce their overnight deficit to one before Europe edged the fourballs.

Mel Reid and rookie Leona Maguire were once again Europe's best pair, winning their foursomes match and earning a half point in the final fourball.

The defending champions have won the Solheim Cup away from home just once before, in Colorado in 2013.

The US need to reach 14½ points to regain the Solheim Cup and extend their overall lead in the biennial series - first contested in 1990 - to 11-6.

"That finish and that last 20 minutes was crucial for us," Europe captain Catriona Matthew told Sky Sports after Reid's birdie putt won the 18th hole and secured a half point in the last match of a day that saw momentum shift back and forth.

"From the start to the day it looked like the momentum was heading towards the US, but edged back a little bit in the afternoon and that half point has buoyed us up.

"(We're) very confident. We would have taken that [a two-point lead] when we teed off in the first round."

Europe had taken a slender 6½-5½ advantage into Sunday afternoon's fourballs after seeing their three-shot overnight lead cut back in the morning foursomes.

The US then dominated the early holes in the fourballs but Europe turned the tide and, among several superb contributions, Maguire in particular caught the eye.

The Irish rookie displayed a nerveless temperament in a burgeoning partnership with the experienced Reid, whose short-range putt on the 18th delivered a dramatic conclusion to their match with Lizette Salas and Jennifer Kupcho

It also ensured that Maguire, who will be the only player from either side to feature in the maximum number of five matches across the three days, remains unbeaten and has collected 3½ points.

The Reid/Maguire partnership had been Europe's sole bright spot in the morning foursomes crushing Nelly Korda and Ally Ewing 5&4 as the US won the other three matches.

US hit back in foursomes

The alternate shot format, usually favoured more by the European players, was dominated by the US in Sunday's opening session.

Europe struck first when Reid and Maguire brushed off a rare moment of Nelly Korda brilliance - on the 13th when she holed a sensational putt for eagle - to record a resounding victory.

World number one Korda was uncharacteristically out of sorts - thinning a fairway bunker shot into a stream, chunking a wedge shot just 15 yards, under-hitting a chip from greenside rough and missing several putts - so it was no surprise that US captain Pat Hurst elected to rest her star player for the fourballs.

But that is not to take anything away from the performance of Reid and Maguire, who were simply sensational.

At one stage, Europe led in all four matches but the US turned three around.

Danielle Kang and Austin Ernst beat Georgia Hall and Madelene Sagstrom on the 18th after the English player was unable to hole a 20-foot birdie putt.

The European pair had been two up after birdies on the opening two holes, but in a rollercoaster encounter, lost the fourth, sixth and seventh to fall behind before regaining the initiative and losing it again.

Lexi Thompson and Brittany Altomare's 2&1 win over Charley Hull and Emily Pedersen was similarly tight, with the lead changing hands twice before the Americans finally wrapped up the match.

Throughout her career Thompson has been susceptible to missing short putts and she again faltered from inside six feet on Sunday, but she holed a 35-footer for a winning birdie on the penultimate hole.

Salas and Kupcho won four holes on the trot to also triumph on 17 in another close match with the previously unbeaten Anna Nordqvist and Matilda Castren.

The US built on the momentum in the fourballs that followed but while the first match to finish appeared a routine 2&1 US win, it was brimming with drama and indicative of what was to follow.

Celine Boutier and Sophia Popov bounced back from being three down after nine against US rookies Yealimi Noh and Mina Harigae with birdies on the 10th, 12th and 13th.

However, after being draped in US red, the leaderboard slowly began to show tinges of European blue as the visitors rallied.

Pedersen made an impressive contribution of four birdies, and alongside Hull, turned a one-hole deficit against Ernst and Kang into a three-hole lead between the fifth and 12th.

Pedersen set the ball rolling, eagling the eighth while Hull crucially followed Ernst in for a birdie on the 10th. The Dane also holed from 20 feet to birdie the 12th and they wrapped up victory on the 16th green.

Moments later, Carlota Ciganda and Nanna Koerstz Madsen defeated Jessica Korda and Megan Khang, with the Spaniard making a timely 30-foot putt on the 15th to edge Europe ahead and they took that one-hole lead down the last, halving it in par to put another blue point on the board and make the score 8½-6½.

And then Reid tapped in for birdie at the last, after her approach shot took a fortuitous bounce off the back of a bunker, to earn a half point and give Europe a final boost. 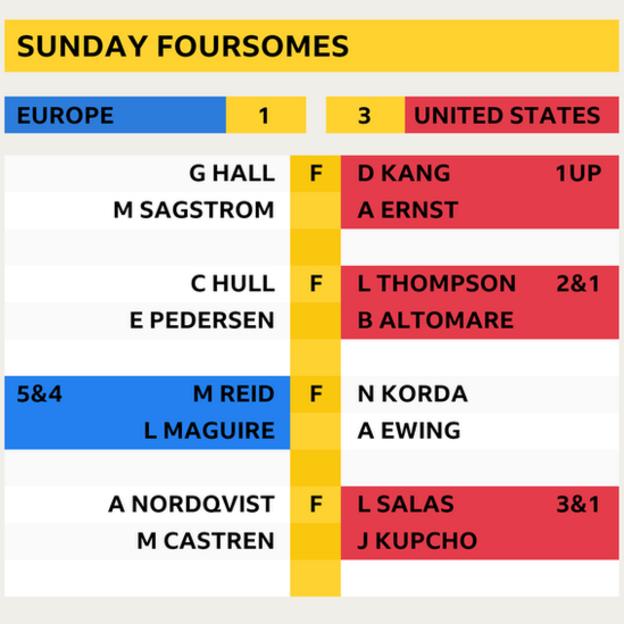 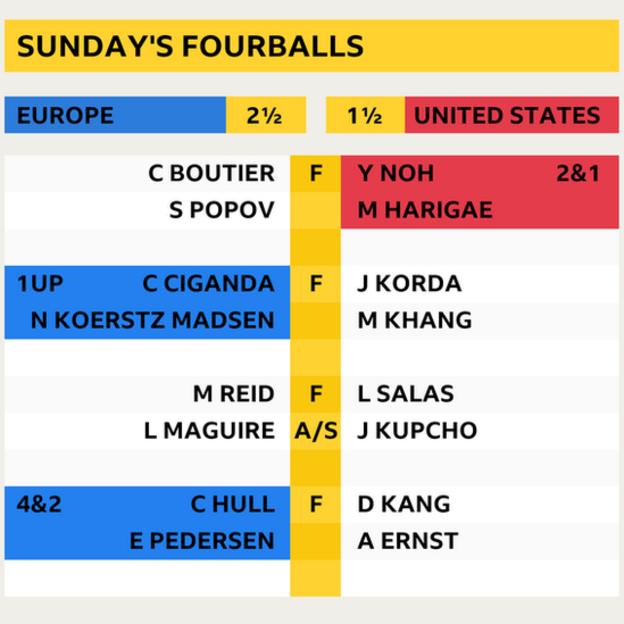 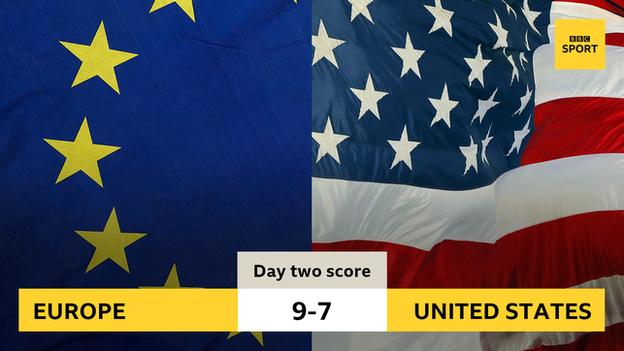