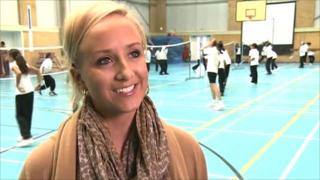 Reigning all-around Olympic champion Nastia Liukin says Britain's Beth Tweddle is a "huge inspiration" to her and she is looking forward to either competing with, or just watching, her at London 2012.

The US gymnast has not competed since 2009 but is going to give it another shot in training to see if she can challenge for a place at the London Olympics.

Tweddle will lead a strong British team at the World Gymnastics Championships in Tokyo this month, which acts as the first qualifying event for places at next year's Games.