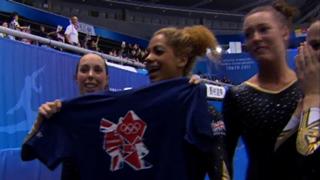 GB women have made the Team Final and in doing so have qualified for London 2012 at the first time of asking.

The British team scraped into the final of the World Championships in Tokyo in the eighth and final position thus ensuring their participation at next year's home Olympics.

However, Olympic champion Beth Tweddle failed to qualify for the uneven bars final after an early error leaving her unable to defend her title, but she had more success in progressing to the Floor final, where she was champion in 2009.