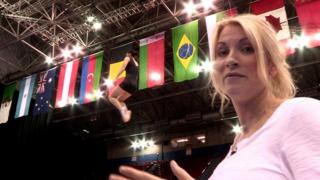 How high can top trampolinists go?

Sydney 2000 Olympic trampolinist and BBC summariser Jaime Moore looks up to the sport's British stars at the World Championships in Birmingham.

Britain has sent a strong squad, including world number one Kat Driscoll, to the tournament. GB won the women's team silver medal on Friday and Driscoll goes in search of individual honours on Sunday.