In the second of a weekly series profiling leading British Olympic hopes in the build-up to the Games, BBC Olympic sports reporter Ollie Williams speaks to gymnast Louis Smith.

Louis Smith gets away with things other gymnasts can't.

He has the Olympic poster-boy looks, a confident swagger and the most difficult routine in the world. He is the face, ringleader and heartbeat of the Great Britain team.

Will any of that help him deliver a medal in London this summer?

It became more likely when Smith and his team-mates went to Tuesday's nerve-wracking Olympic test event at the O2 Arena in London and secured space for a full five-man GB team at the Games.

Smith, 22, has already enjoyed success at the highest level. He became the first British man to win an Olympic gymnastics medal for a century when he won bronze on his specialist piece of apparatus, the pommel horse, in Beijing four years ago.

Louis is very much a crowd-pleaser. He likes to be the centre of attention. In the gym, you'll be training and suddenly he'll break into song. If I broke into song, people would wonder what was wrong with me but that's Louis. You always wait to see what hair he has next. I don't think I'd take hair tips from him, but he can pull off anything. Some of the clothes he wears... But Louis? He can get away with it

But his hair, the words he uses and his demeanour set him apart as much as his moves on the pommels. This is by design. Smith wants you to understand he is unique in a sport known for conformity.

"Gymnastics is about visuals, what you look like," he says the morning after winning those Olympic places. "Everyone is the same, the same hairstyle. I like to be different."

Smith has had four hours' sleep. The press adore an unusually expressive athlete and Smith likes talking, so by the time he had extricated himself from the venue - and stopped at a Chinese takeaway next door to his hotel, the only food still on offer - it was 2am.

Before 7am he was back inside the arena, live on breakfast television, but this has been his life for years and the Louis Smith look is as neatly groomed as ever.

"I'm outgoing, I'm an extrovert," he adds. "I like to change things up a bit. My barber that I go to in Peterborough [Smith's home town], he looks after me. We throw a few ideas around."

While the hair may change, Smith has a constant reminder tattooed on his back. "What I deserve I earn," it reads above a large image of a winged cross.

"I am religious," he says. "I went to Sunday school, I believe in God - I think I'd be too scared not to. I definitely feel like there's someone looking over me.

"Before I do my pommel-horse routine, I talk to a few people in my head. I say a few words to Nan. It sounds silly, but it's what I do. And then I give it my best shot." 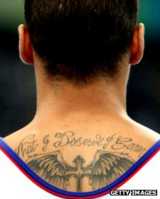 I think if I wasn't here, the emotions would get on top of everyone

Smith's grandmother passed away just before he appeared at the 2009 World Championships, also staged in London. By then, the younger Smith had already pronounced "gymnastics in this country needs a face", but he tried too hard to be that face, on and off the apparatus. Confidence became cockiness, assurance verged on arrogance.

In the wake of his grandmother's death, and a humbling fall in that year's world final, a new mantra took over.

"I've changed drastically," he says now. "That was my first major competition after the Beijing Olympics. I was young, it was the first time I'd really felt expectation.

"I went in thinking 'I need to win this, everyone keeps asking me if I'm going to win'. And I buckled. It goes to show you can't go in thinking you need to win; a gymnast needs to be cool, calm, treat it like a training session."

There have been more high-profile falls since, but successes too - silver medals at world and European level and pommel horse bronze at the 2011 World Championships in Tokyo, where a heroic attempt to pull off the world's hardest routine met with failure only in the final seconds.

Smith's prominence may seem odd, given his team-mates compete on all six pieces of apparatus, compared to his one. However, he believes his role in the team transcends his own results.

"I've learned to respect each competition but have fun with it, and I bring a more relaxed approach to the team. I think if I wasn't here, the emotions would get on top of everyone," he says.

Louis is full of character. He's got so much gumption about him. He has the image and he's changed the perception of gymnastics - he's put an edge on it and brought it into the 21st century for Britain

"I do a good job of cracking a joke when I need to, taking the mick and letting the team feel like, 'Ah, Louis is still relaxed and having fun, so it's not such a big competition'. I try to trick them a little bit.

"I've been performing in British gymnastics for a long time now, at the top. A lot of these guys, I hope, look up to me."

Team-mate Dan Keatings, who trains alongside Smith in Huntingdon, certainly does.

Keatings won the all-around world silver medal in 2009 and yet has never quite nudged one-piece wonder Smith (who can in fact perform all six if required) off centre-stage. Keatings is not concerned. Speaking after his success two years ago, he said: "It's helped me, Louis taking the limelight. Just being alongside him is a good thing."

Nothing has changed two years later. The pair laughed and joked their way around the Olympic test event, in spite of the tension and the nerves to which Keatings confessed beforehand.

Smith will need his team-mates as much as they need Smith at London 2012. For all his media-savvy front and considerable experience, Smith - a one-time X Factor hopeful - has only one chance to prove Britain's got gymnastics talent this summer.

Standing in his way is Hungarian Krisztian Berki, world champion for the past two years. Berki does the easier routines better than Smith, so Smith's recourse is to try much harder routines which carry a greater risk of outright failure.

"It's crazy, the amount of difficulty we can put in," Smith says of the work he and coach Paul Hall have done to maximise the marks he can score.

"But it's about managing that, preparing in the right way and being able to get through that routine. I'm 22, I'm young, but I've been around the block. I've done a load of routines and made a few mistakes in the past.

"Hopefully all this experience, all the years I've been training, will gather into me doing a good routine."