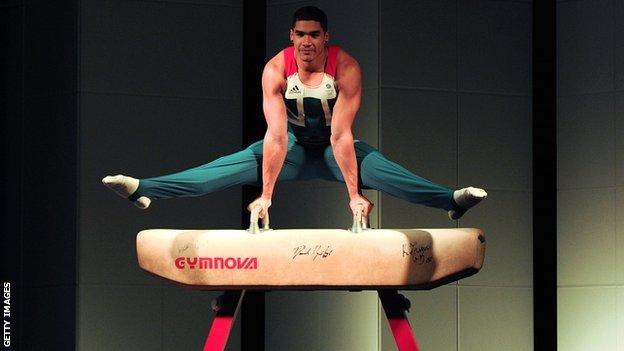 Gymnast Louis Smith did not do as much damage as first feared when he fractured a finger during a training routine, his coach has told the BBC.

The 22-year-old pommel horse specialist stubbed his finger on the high bar at Huntingdon Gymnastics Club on Tuesday.

"Louis is fine," coach Paul Hall told BBC Radio Cambridgeshire. "The initial prognosis wasn't good but he's since been in the gym and working pain-free.

"He's on track for going to China next week to compete in a World Cup event."

Smith became the first Briton in 80 years to win an Olympic gymnastics medal when he won bronze on the pommel horse at the Beijing 2008 Games, and is one of the faces of Team GB for London 2012, though he has yet to be rubber-stamped as a member of the British Olympic team.

Initial reports had suggested the fracture could keep Smith out of action for a month, but Hall admitted both he and Smith had been pleasantly surprised by the speed of Smith's return.

"We've had it checked out, and the x-ray came back with a very small fracture," said Hall.

"These injuries happen but fortunately this is a minor one, it hasn't interrupted his training.

"We're experts at training around injuries now, and when things do occur there is still plenty you can do."

Smith took to Twitter to post pictures of himself performing more training routines on Thursday, to prove he was back in action.

A day earlier he had tweeted an image of his arm in a sling, but the image was later removed.