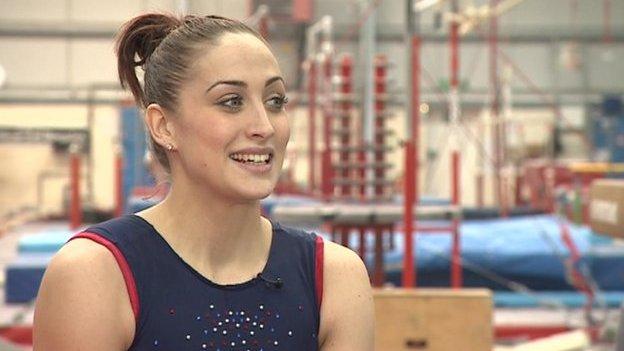 Lisa Mason won gold in the vault at the English Championships in her first competition in more than 12 years.

The 1998 Commonwealth champion, whose last competition was the Sydney 2000 Olympics, averaged 13.250 to win from Eleanor Thompson and Eleanor Clifford.

The 31-year-old mother of one decided to return to the sport after a demonstration event at London 2012.

"I mean business. I'm not doing it for a laugh," said Mason, whose focus now turns to the 2014 Commonwealth Games.

The Huntingdon-based gymnast had become inspired to train again after seeing the build up and excitement around London 2012.

"I just came out here to have it as a trial competition for the British so I'm over the moon. Thirteen years out and to come away with a title already - I'm really really pleased," Mason told BBC Sport.

"I'm doing it to enjoy it and I'm loving coming back but I just hope a lot of people are coming to the reality that I am actually coming here to do something like this."