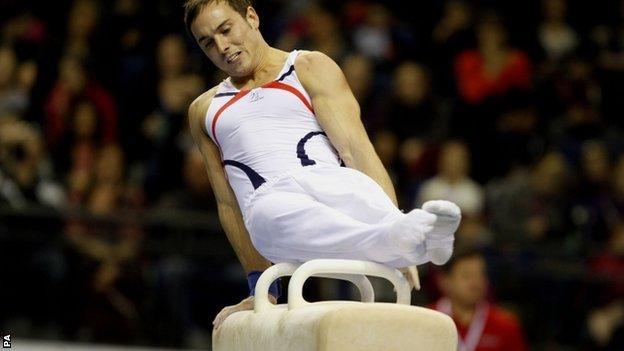 Former world silver medallist Daniel Keatings hopes his impressive five titles at the British Championships will help him move on from the 'heartbreak' of missing London 2012.

Keatings, a 2010 European Champion, was named only as a reserve for the Olympics.

“To miss out on London was heartbreaking really, but it's made me even more determined to fight back,” 23-year-old Keatings told BBC Sport.

“Winning five out of my six events this weekend is just amazing.”

The Kettering-born gymnast, who won three gold medals on Saturday and two further masters titles on pommel horse and parallel bars on the final day of competition, added: “I'm just so happy that I've done it this weekend when it matters.”

The GB squad for next month's European Championships in Moscow will be named on Thursday. With Kristian Thomas out injured, Olympic bronze medallists Max Whitlock and Dan Purvis are likely to be given the nod for the two all-around berths.

However, Keatings has put himself into strong contention for one of the places in the individual events.

His last European Championships were in Birmingham in 2010, when he secured victory over Beijing Olympic bronze medallist and training partner Louis Smith in the pommel horse final.

Just a month later, though, Keatings damaged his anterior cruciate ligament in his knee in a training fall.

After intense rehabilitation, he returned and was part of the GB men's squad who secured a full team for London 2012 by winning the Olympic test event in January of that year.

However, once again his injury-jinx hit and he was ruled out for a further six weeks with an ankle problem.

The Huntingdon Gymnastics Club athlete still managed to secure two British titles that year, but it was not enough to convince selectors and he was a frustrated spectator as Smith, Thomas, Purvis, Whitlock and Sam Oldham secured GB men's first Olympic team medal since 1912.

“Over the last two years, when I've been injured, it's been so hard to get back,” admitted Keatings, who failed with an appeal to overturn his Olympic axe.

“I wanted to prove to everyone what I can still do. Hopefully that's what I've done this weekend.

“I haven't done a European Championships since 2010, so I haven't had a chance to defend my pommel horse title and it would be nice to go there and do that.”

Another who gave himself a timely qualification boost was Theo Seager, who, like Keatings, also secured two masters titles – on the rings and vault.

Oldham, Frank Baines and potentially Reiss Beckford could also come into contention for places in the European men's squad.

With Olympic bronze medallist Beth Tweddle only recently returning to training and set for another spell away from the sport as she takes part in a 'Dancing on Ice' tour and Team GB's youngest 2012 Olympian Rebecca Tunney injured, the women's team is likely to be led by teenage sensation Gabby Jupp.

The 15-year-old did not compete at London 2012, but visited the Games as part of the British Olympic Associations 'aspiration programme', which aims to give potential future Olympians experience of the multi-sport environment.

Jupp is certainly living up to that billing after

“It's been a great weekend and to top it off with the medals today was amazing,” Jupp told BBC Sport.

Britain are expected to name 10 athletes in the squad for Moscow Europeans - six men and four women.