Britain's most decorated gymnast, Beth Tweddle, has announced her retirement on the anniversary of her bronze medal success at London 2012.

Tweddle, 28, has not competed since she claimed her first Olympic podium finish last summer. 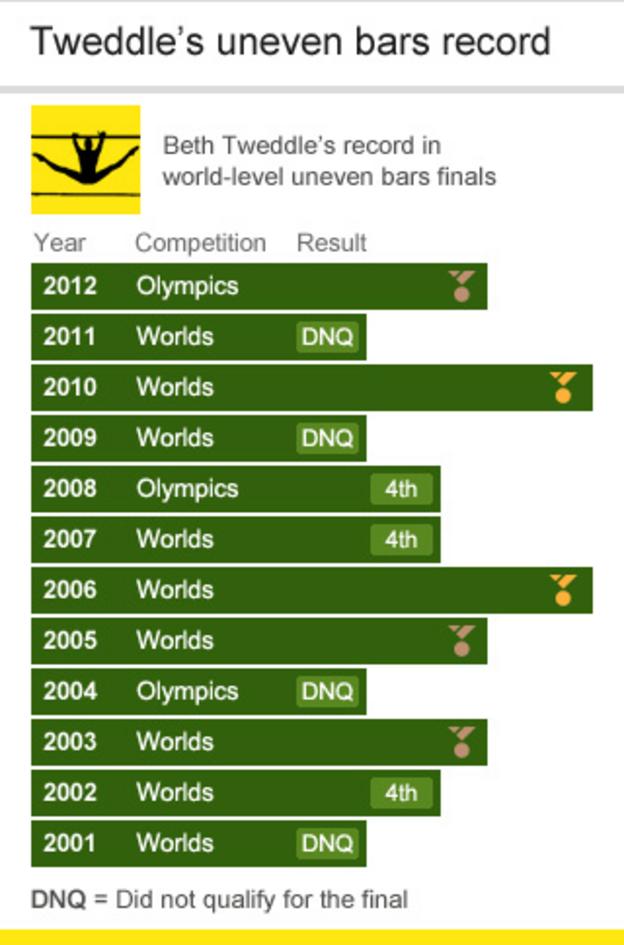 That display on the uneven bars was the highlight of a career in which she won three world and six European golds.

"It's been a hard decision. Gymnastics has been and always will be a massive part of my life," she said.

The City of Liverpool gymnast ended her Olympic disappointment last summer when she finished third with a score of 15.916.

Despite continuing to train, she took a break from competitive gymnastics after London 2012, subsequently missing events such as April's European Artistic Gymnastics Championships.

"Following the Olympics I've had a lot of projects on and recently I've had a bit more time to get back into the gym and decide whether I could put 100% into it. I know now deep down that I can't commit to the hours and training to remain at the very top," Tweddle said.

"I don't think my achievements will ever really sink in but, when I do look back, I can be very proud of what I've done and how I've done it."

Tweddle's record-breaking medal haul began aged 17 at the 2002 Commonwealth Games in Manchester, where she collected a gold and two silvers.

"Out on her own as Britain's sole world-class gymnast for much of her career, she broke down barriers for British athletes and showed generations of younger gymnasts that success could be theirs on the biggest stages.

"Her Olympic bronze medal at London 2012, having come so close to the podium in Beijing four years earlier, was the least she deserved after decades of tireless dedication to the pursuit of perfection and promotion of her sport."

Throughout the next decade, she went on to win more than 20 golds in major championships throughout the world.

Tweddle's achievements were made all the more remarkable by the fact she battled a knee problem to remain successful in a sport in which it is rare to compete much beyond the age of 20.

British Olympic Association chairman Sebastian Coe labelled her "an inspiration and a role model for a generation".

"During a remarkable career that has seen her achieve unprecedented success at every level of competition, Beth Tweddle has set a new standard of excellence for British Gymnastics," he said.

Tweddle - who finished third in the BBC Sport Personality of the Year voting in 2006 - follows cyclists Sir Chris Hoy and Victoria Pendleton and swimmer Rebecca Adlington in deciding to end her sporting career post-London 2012.

Following her announcement, a Beth Tweddle Academy is to be opened in a school on the London Olympic site. This will provide gymnastics training for children aged 2-14 years old.