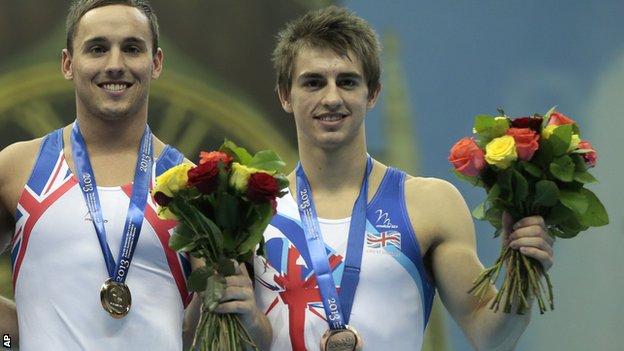 Four of Great Britain's bronze medal-winning team from London 2012 have been named for the upcoming individual World Championships in Antwerp.

Sam Oldham, Kristian Thomas, Max Whitlock and Dan Purvis will all compete from 30 September to 6 October.

The quartet, together with Louis Smith, won GB men's first Olympic team medal since a bronze in 1912.

Hannah Whelan and Rebecca Tunney, who also competed at London 2012, are part of a 10-strong British line up.

Daniel Keatings, who won the European Championships pommel horse gold in April having missed the Olympics through injury, is also included along with Ashley Watson.

Whitlock, individual bronze medallist in the pommel horse at London 2012, shared gold with Israel's Alexander Shatilov on the floor at the European Championships in Moscow.

Ruby Harrold, who reached the all-around, beam and uneven bars individual finals at the European Championships, and Rebecca Downie, who made the uneven bars final, complete the British contingent.

"An individual World Championships gives an indication as to the progress of gymnasts from the top nations and the improvements made in the new cycle," said British men's head coach Eddie Van Hoof. "For the British boys it gives a chance to show upgraded routines and the opportunity for individual gymnasts to shine."

Women's head coach Amanda Reddin added, "The aims for the championships are to compete good quality routines working towards qualification for finals and putting a marker down for the rest of the cycle."