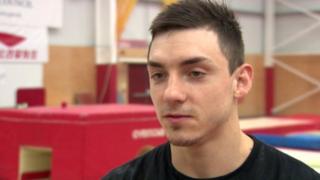 Commonwealth Games hopeful Luke Carson says his gymnastics career is in doubt after a second leg break in two years.

Carson suffered his latest broken tibia while attempting a vault in on Tuesday.

"I felt a massive snap from my tibia and it was quite apparent that there was a massive fracture," Carson, 23, told BBC Sport Northern Ireland on Wednesday.

"I'm lying here in hospital now. I didn't sleep a minute here last night. I was just thinking about how this has happened to me."