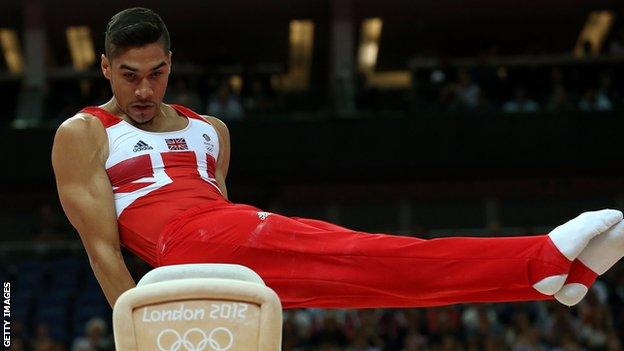 Olympic silver medallist Louis Smith has said he has rediscovered his love of gymnastics after an 18-month absence from the sport.

The 24-year-old has not competed since winning silver at London 2012, but hopes to represent England at the Commonwealth Games.

"It's a very unique time after 2012. Now I've fallen back in love with it," he told BBC Radio Cambridgeshire.

"I'm enjoying it and I look forward to trying to get to the Commonwealths."

Peterborough's Smith took two medals at the London Games, finishing second on the pommel horse and claiming bronze in the team event with Great Britain.

But he took time off from the sport to pursue other interests, including modelling, releasing a book and winning the BBC programme Strictly Come Dancing.

He claims he received criticism for taking a break, but says the long hours and lack of days off over 20 years of training contributed towards his decision.

"It was a good opportunity to get my face out there and perhaps secure something for the future," he said.

"Another reason was the Games were very stressful. The expectation and getting so close to gold, I think I needed a break.

"People give you a bit of stick for it because they think you get time off all the time. But it was nice to be normal."

Smith now has to earn a place in the England squad to go to the Commonwealths, a competition he won gold at eight years ago.

Smith was speaking at the re-opening of the Huntingdon Olympic Gym, the building where he has trained for his entire career, following a £1.48m refurbishment.

He put on a pommel horse display for guests and admitted it was his first public performance since the Olympics.

"It's been so long since I performed a routine in front of someone, I'd forgotten what it feels like," he said.

"The last time was the Olympic Games. I was nervous. I actually did a harder routine to use that adrenaline."