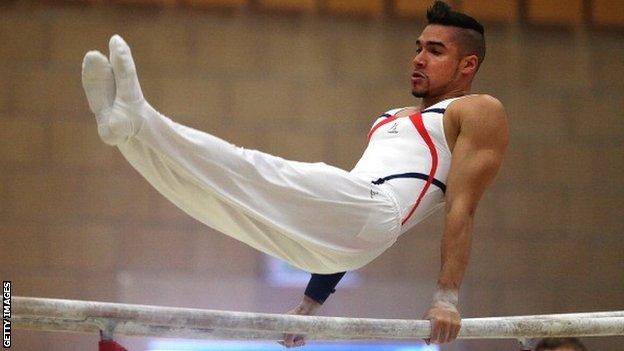 Triple Olympic medallist Louis Smith said he was "relieved and happy" after a strong performance in his gymnastics comeback at the English Championships.

The 24-year-old, from Cambridgeshire, has come out of retirement to try and win a place in the England team for the Commonwealth Games in Glasgow.

But most eyes in the audience were on Smith to see whether he still had the form and fitness which won him three Olympic medals.

Smith told BBC Sport: "Everyone was watching so it was a little bit stressful and quite nerve wracking.

"I think I've proved something to myself, and I think I feel I can offer a lot more."

Five men will be selected to represent England at the Commonwealth Games.

London 2012 team bronze medallists Whitlock, Kristian Thomas and Sam Oldham are near certainties to be picked, leaving Smith fighting for one of the last two spots.

"I think I've done enough to be considered," he added.

"Now I need to keep on doing well. I need to go to the British Championships and to as many competitions as I can and prove that I am consistent."

The next chance for gymnasts to impress the selectors is at the British Championships in Liverpool from 28-30 March.