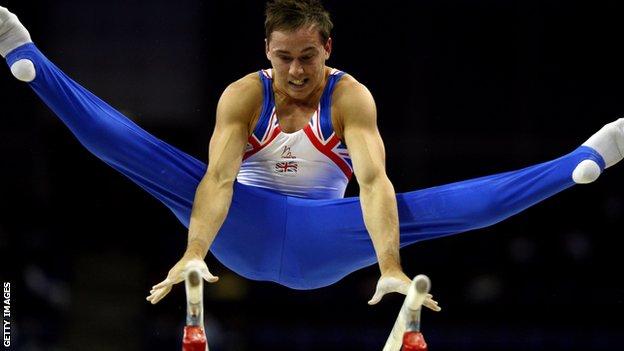 Scottish gymnast Daniel Keatings says the 2014 Commonwealth Games in Glasgow can be "the Olympics I never had".

Keatings, 24, missed London 2012 with injury having been a leading member of the British team in the build-up.

He faces English rivals including Louis Smith in this weekend's British Championships in Liverpool, a key selection event for Glasgow 2014.

As the reigning European champion on pommel horse, Keatings is set to form an accomplished Scotland line-up alongside Dan Purvis, the 2010 world bronze medallist on floor and a member of GB's bronze medal-winning men's team at London 2012.

The British Championships form a major selection event for the home nations' Commonwealth Games teams. Producing one of the top performances in Liverpool will help gymnasts secure their place at Glasgow 2014.

Saturday, 29 March features the men's and women's all-around finals. All-around competitors must perform routines on every piece of apparatus, with their scores added up to produce an overall tally. Men compete on six sets of apparatus (floor, pommel horse, rings, vault, parallel bars and high bar) and women on four (floor, beam, vault and uneven bars).

On 30 March there are more finals on each individual piece of apparatus in turn - a chance for specialists such as Louis Smith, who do not compete in the all-around, to shine.

They are likely to be joined by 18-year-old Frank Baines, who moves into the senior ranks this year.

"It's a strong Scotland team," Keatings told BBC Sport. "Frank is the junior European champion and is really hard-working. He's making sure me and Dan Purvis are on our toes.

"I'm really excited to compete in Glasgow. It's like the Olympics I never had."

Smith and Keatings are close friends who trained together for more than a decade before London 2012.

Smith spent a year away from the sport after his silver medal on the pommel horse - an event Keatings, who was not selected after struggling with ankle damage, watched from the sidelines.

"I always knew Louis would come back," said the Scot. "It felt like he had unfinished business. It's good to see him back."

England's Rebecca Tunney sets out to recapture the British women's title this weekend having missed 2013's event through injury.

Tunney became the British champion in 2012 aged just 15, and went on to star as the youngest member of Team GB at her home Olympics.

"I've definitely matured since then. I understand more about the sport - it was all a bit overwhelming at the time and it went over my head," Tunney told BBC Sport.

"This weekend will give everyone a taste of what they need to work on, and what chance they've got to be in that Commonwealths team."

England and GB gymnasts Ruby Harrold and Hannah Whelan will also compete in Liverpool, while Raer Theaker is the top Welsh prospect.

England's Gabby Jupp will not defend her 2013 all-around title as she returns from ligament damage, but will take part in individual apparatus events.