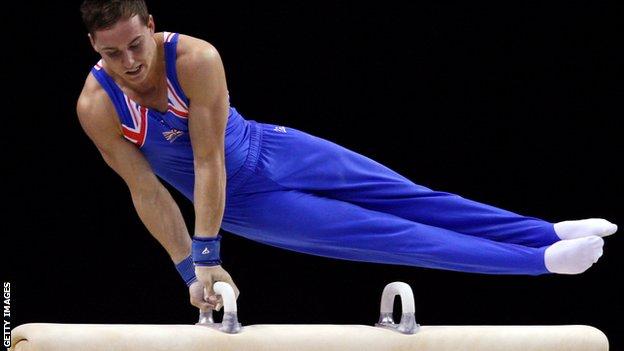 Scot Keatings, who missed the London Olympics through injury, has a personal best of 16.133, but scored a surprisingly low 14.633 in Bulgaria.

"I'm not sure what happened," the 24-year-old told BBC Sport.

There was better news for Britain's five-strong team, with the defending champions topping the qualification standings ahead of Saturday's final.

Whitlock qualified for Sunday's individual pommel horse final, and will be joined in the floor event by Purvis, whilst Oldham and Thomas secured the top-eight finishes they needed for the high bar final.

Keatings missed out on the parallel bars final - although he was in good company, with German Olympic silver medallist Marcel Nguyen also failing to make the cut.

"I performed the [pommel horse] routine I won with last year, which was supposed to be the easy one and then I'd bring out the new routine in the final," Keatings said.

"The judges have been quite harsh, but that happens sometimes."

"I've been working really hard on the floor and have a new routine," the double Olympic bronze medallist told BBC Sport.

"I am really trying to retain that title but the pommel horse has always been my main focus so I am happy to get through with my best routine as well."

Friday will see British juniors boys Nile Wilson and Brinn Bevan contesting the all-around final - with both expected to be in contention for a medal.

Wilson, 18, was the stand-out performer when the five-strong junior boys squad claimed their fourth successive European team crown on Wednesday.