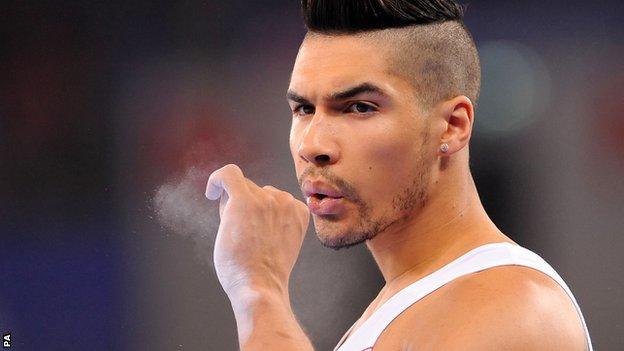 Commonwealth Games bronze medal-winning gymnast Louis Smith has confirmed he intends to fight for a place in Great Britain's teams for next year's European and World Championships.

Smith said success in Glasgow had inspired him to stay in training.

The Huntingdon-based gymnast pursued other opportunities, including on television, after winning a silver medal at the 2012 Olympics.

I'm going to be back for a few more years now, training and trying to get back into the European and World Championships teams

He told BBC Radio Cambridgeshire: " I'm going to be back for a few more years."

Smith added: "I've been to a few Games' before, Commonwealth and Olympics, and these have probably been the least stressful and that I've enjoyed the most.

"Having come back and trained so hard and had such a great result and to be part of such a fantastic team and Games, it was just a great experience.

"After six months of training my backside off to get where I am and lose the weight and get fit again, just to know it wasn't done for nothing was great.

"I've had a much smaller team behind me, helping me, and it was nice to be able to repay them and show my appreciation.

"You're always going to get critics and doubters and people who are going to make it an uphill battle for you, but I put in the hours, I did the training and I gave myself the opportunity to prove them wrong and I did that.

"Not only that, I'm going to be back for a few more years now, training and trying to push to get into the European and World Championships teams."

However the 25-year-old said he would concentrate on training for the rest of the year before looking to push on again in 2015 - an indication he will not be looking to force his way into the team for October's World Championships in China.

He also said he was not yet thinking about the Rio Olympics of 2016.

"The amount of youngsters coming through the GB ranks now, they're really pushing the boundaries. For someone of my age it's hard to stay in amongst it, so I have to take it each day as it comes. I need to look after my body and just get on with my training.

"It's great that it's such young gymnasts doing it, it's almost starting to make gymnastics cool!

"It's been very traditional over the years but I think we're starting to break away from that now, the young guys are doing their thing and winning medals, it's enjoyable, and gymnastics is in a very good position at the minute."

Earlier this year the Huntingdon Gymnastics Club, where Smith and several other members of the GB squad train, opened a new £1.5m extension.

Smith said: "It's going really well, we're feeding a lot more kids through the system. I can do a lot more inter-acting with them.

"It's a great place, so I'd urge anyone wanting to take up gymnastics to go to their local club or even come down to say hello to us training there, because everyone is welcome."