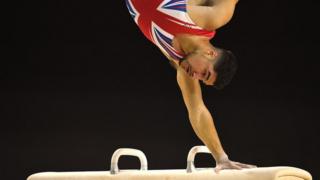 Smith, who came out of retirement last year after winning the BBC's Strictly Come Dancing, was first up and set a score of 15.8, which the rest of the field could not match.

It was the second gold medal of the day for Team GB after Kristian Thomas' win on the floor.