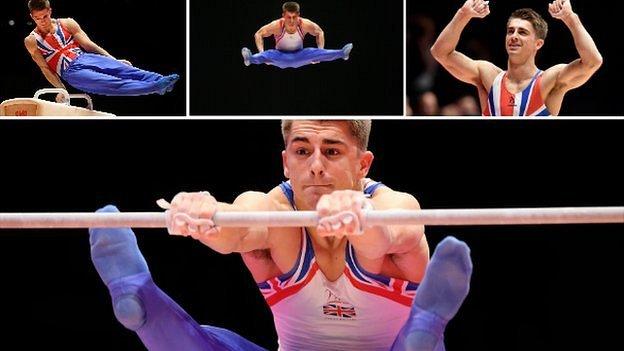 When Superman was sapped of his strength he knew to blame kryptonite. There was a solution. When the powers of Britain's most successful male gymnast were waning, his coordination failing and muscles weakening, there were no such obvious clues.

Max Whitlock is only 22 but he has already won 21 major medals. He not only wants to dominate the world but become a giant of his sport, one of the greatest in history.

But at the beginning of this year the boy from Hemel Hempstead with global ambitions could not accomplish routine twists and tricks. He was stressed, panicking. He did not know what was wrong.

"It was over a three-month period and I went from feeling the fittest I've ever been, making my routines, to slowly deteriorating. I'd struggle to do anything over 30 seconds long," Whitlock remembers.

Training sessions would have provided wonderful material for those partial to the silly and slapstick; a double Olympic medallist gradually morphing into Frank Spencer, falling and toppling over when all he had known since the age of seven was gymnastic excellence.

Whitlock is now at ease remembering those anxious spring months because, despite it all, last weekend he became the first British man to win a world gymnastics title, ending a nation's 112-year wait for gold.

The illness which "completely drained" him, glandular fever as it turned out, helped push him further, he says.

With the pommel horse gold he won at the World Championships in Glasgow resting on the table in front of him, alongside the two silvers he won on the floor and in the team event, Whitlock can laugh as he explains the turning point in his year, a training session on the parallel bars with his coach Scott Hann.

"I nearly landed on my head," he recalls, flashing a smile and shaking his head.

"I was trying a big skill, one of the new ones I'd put into my routine, but my body couldn't do it, my arms couldn't take it. It didn't go to plan. My coach drew a line under it and said 'I think you need to stop'."

On doctor's orders, there was three weeks of complete rest - only the second time the Essex-based gymnast had been away from his gym in Basildon for such a period since London 2012 - before gradually returning to a familiar regime.

"I tried not to get out of bed, I was told rest was the only real help, which was tough," says Whitlock. "But I do believe it got me more motivated to get back to where I was, and hopefully better.

"I only did an hour in the gym to start with and built it up as and when I could. I knew what I had to do, learn new skills for the Worlds and add difficulty for some of the apparatus."

It was Whitlock's training, endlessly repeating routines during a 35-hour week, which prepared him for Saturday's knee-knocking climax at Glasgow's Hydro Arena.

Louis Smith, Britain's most recognisable gymnast, a pioneer of his craft, had produced a flawless performance on the pommel horse to top the standings. Then came Whitlock, the final participant. Guns flexing, a gold-medal shoot-out awaiting him.

The triple Commonwealth gold medallist was unaware of Smith's score. He never watches his fellow competitors perform, even if they're only 25m in front of him. That would be a distraction. Admiring others, he says, would affect his performance.

Whitlock walked through the tunnel from the warm-up area towards the glare of the main stage's lights with his coach. Their conversation was concise, full of knowing nods, a telepathic understanding based on a decade-long partnership.

"My coach asked 'so what are you going to do?'" recalls Whitlock. "My coach was watching Louis and knew he had a massive score but he didn't want to tell me because he knows me well.

"I asked 'do I need to do a bigger routine?' and he just said 'possibly' so from then on I knew there was a big score out there, it was very difficult to hide that fact, so we decided to up the difficulty. It was a last-minute thing.

"In previous years I've gone in with a set routine, but these championships were about doing the best possible - going for gold, but trying not to think or say that."

The change, increasing the difficulty rating by a tenth, was a brilliant decision, Whitlock admits. He beat his team-mate by 0.1 points - the difference between gold and silver, between history-maker and nearly man.

"I had done the training, I was as ready as I could be. It was just about doing it," he says.

"It's about just going there, relaxing and enjoying the experience. It's become harder to do that. It's definitely a different type of pressure these days. Before the Olympics I was going in as the underdog, no-one was expecting anything, but every competition after that everyone has been expecting results."

There is good reason for those cranked-up expectations. Since winning pommel horse bronze in 2012 as a 19-year-old in his first Olympic individual final, Whitlock has more often than not returned from major championships with a bag full of medals: five at World Championships, six at European Championships, five at last year's Commonwealth Games alone.

In his social medial world, Whitlock's Twitter (46,500 followers) and Instagram accounts (42,600 fans) have "gone crazy" since the weekend.

"I do like it when people are thanking us for inspiring their kids, that sort of stuff means a lot to us because that's what it's all about," says Whitlock, successfully hiding inevitable fatigue after a 2.30am wake-up call to start a day of endless interviews.

He is not the sort to get alarmed or frightened by the life-changing consequences of continued historic triumphs. He is, after all, an athlete whose star has constantly been rising, an ad man's dream. A clean living boy with a flair for design and numerous party tricks - one a back-flip with a football between his feet, directing the ball into an open boot of a car.

At the beginning of the year Whitlock was chosen by British designer Paul Smith to be the face of a new advertising campaign. Videos of the suited Briton, pivoting and rotating in expensive designer clobber, have since been projected onto Tokyo skyscrapers. There will be more of that, because Whitlock wants it, but neither will he lose focus.

He admits he loves being recognised but his main motivation is to become a "legend" in the world of gymnastics, with Olympic gold in Rio the next step on that mission.

"That's why we're so proud of this achievement," he says of his pommel horse gold and Britain's best ever World Championships medal haul of five.

"It feels amazing. I would love to be a legend in the sport and to do that I need to go to many, many Olympics and that's what my main aim is. I want to carry on as long as possible and do as many Olympic cycles as my body can take."