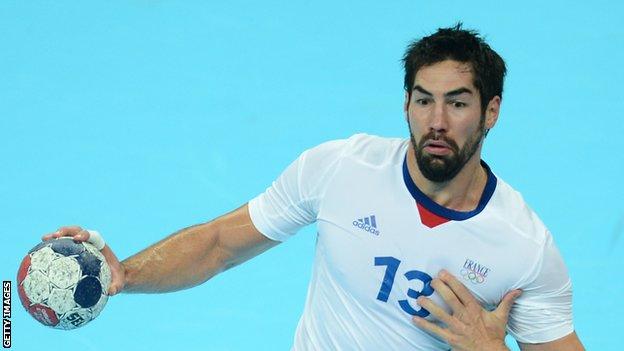 Lawyers for the players who are being held say they've admitted placing bets in the match - but not to deliberately throwing the game. It's a big difference because betting on your own team is against the rules of the sport and can lead to a suspension and a small fine. Throwing a match is a criminal offence that can lead to jail.

Karabatic, 28, is considered one of the greatest players of the game and won gold medals with the French team at London 2012 and in the 2008 Games in Beijing.

The Montpellier left-back was picked up by police on Sunday evening at the end of a match in Paris, along with four other players and several officials and their friends.

The investigation centres on betting made during a match between Montpellier and a team from Brittany in May.

Montpellier, who have dominated French handball for the last 15 years, lost 31-28 to Cesson-Sevigne.

At the time, Montpellier were already guaranteed a 13th league title in 15 seasons, while the Breton club were in eighth place in the league.