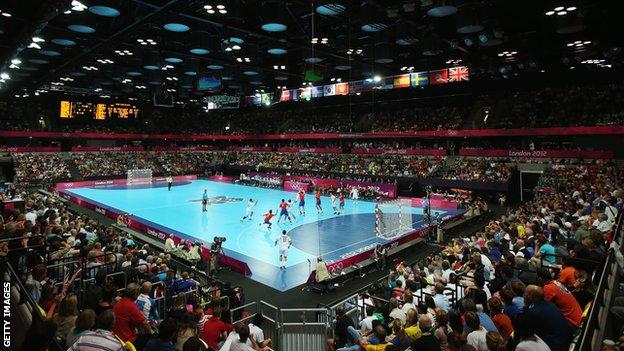 London GD handball club are set to move into the Copper Box Arena at the Queen Elizabeth Olympic Park.

The venue, which will also be home for the London Lions basketball side, staged handball at London 2012.

"It's huge and is fantastic news for us," London GD player-coach and development director Jordi Ferrer-Torras told BBC London 94.9.

"As a club our immediate objective is to promote the sport so it's a really good opportunity."

London GD, who are currently based in Leyton and Bethnal Green, will use the facilities at the Copper Box to train and will also have the opportunity to play their home matches there.

The club, which was founded in 1976, is one of the UK's oldest and most successful handball clubs.

"Obviously it's endless the amount of things you can do in terms of bringing international tournaments, international teams, doing more things for kids and bringing schools together."

Handball is not receiving any funding from UK Sport in the run-up to the Rio de Janeiro 2016 Olympics and the Great Britain side may have played their last-ever competitive international.

However, Ferrer-Torras hopes their move will help the sport boost its profile and increase participation.

"We need to work on the grass roots and the bottom of the pyramid but it is a bit disappointing there is no funding on the elite level at all," he added.

"You want kids to be aspiring to be Olympians and athletes.

"Our vision as a club is to prove that handball can be successful in an English-speaking nation, which hasn't been done before.

"So I suppose as a leading club in the country we want to prove that it is actually possible."