Germany, billed as the toughest side in Pool B, were surprised by their determined and energetic opponents.

"Germany are third in the world for a reason and it was great to see us tearing them apart," said Cullen.

In both events, top two from each pool (after three matches) proceed to semi-finals

They won the last men's European title, in 2009, with a shock 5-3 victory over Germany in a game that marked England's first appearance in a Euro final for 22 years.

The current squad is probably the strongest they can field, with no injuries heading into the tournament, and they were expected to have little trouble seeing off an Ireland team ranked 14 places lower in the world.

But the Irish began the game the livelier side by far, playing under no pressure, and deservedly went ahead through Chris Cargo.

Matt Daly equalised with one of a sluggish England's first real chances of the game before Barry Middleton turned home from close range in the second half.

Ashley Jackson scored from a penalty corner as he completed his comeback from eight months out with injury, but a similar goal from John Jermyn at the other end was no more than Ireland deserved.

Ireland drew acrobatics from England goalkeeper James Fair as they pressed for an equaliser until Middleton capped a late England break to score his second of the game.

"I'm very happy with that win. We knew it was going to be tough," England captain Middleton told BBC Sport. 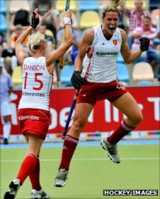 "We didn't play the best we can play but nobody goes into a tournament and plays 70 minutes for five games the best they can.

"Ireland are a good team and I thought, after 10 or 15 minutes where they started well, we controlled the game quite well.

"We showed a lot of quality and fighting spirit - things we want to see in this tournament - and that showed we're going to be a force to be reckoned with again."

Despite beating Belgium 4-0 in their opening group game, England's women had pronounced themselves disappointed with their performance.

Their stylish answer was to dismantle their German hosts inside Moenchengladbach's Warsteiner HockeyPark on Sunday, led by two impressive Cullen goals.

Cullen, who turned 26 on Saturday, now has three goals from the tournament's opening two games.

"I'm just the lucky person who takes penalty corners," she told BBC Sport. "It's great that they're going in for me and I hope that luck continues.

"Germany against England is always a really hard game to play in. They are always the team to beat - it's notorious across all sports.

"It's fantastic that we came out here against a home crowd and proved our worth. But Germany will be back, as they always are."

England's men take on the Netherlands in their second group game at 1800 BST on Monday, while the women are next in action at 1200 BST on Tuesday in their final group game against Ireland.

The women will progress to the semi-finals regardless of Tuesday's result after Ireland lost 3-0 to Belgium late on Sunday.

That result means Ireland, without a point, can no longer qualify, while only one of Germany or Belgium - who play each other in the remaining group game - can match England's current tally of six points. The top two from each pool move forward to Thursday's semi-finals.

Though they are playing as England here, both the men and women train full-time alongside players from the other home nations and will compete as Great Britain at the London 2012 Olympics - for which they are automatically qualified as the hosts.