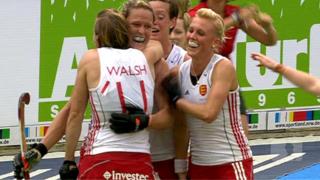 Full-back Crista Cullen scores her second goal of the match from a penalty corner to secure victory for England over hosts Germany in the European Hockey Championships.

The 2-0 win sees England top their pool having beaten Belgium 4-0 on Saturday and means they are likely to avoid a potentially tricky semi-final against the Netherlands, who are ranked second in the world.

Their final match is against Ireland on Tuesday at 1200 BST, a match you can watch live at bbc.co.uk/sport (UK users only) and on the Red Button.