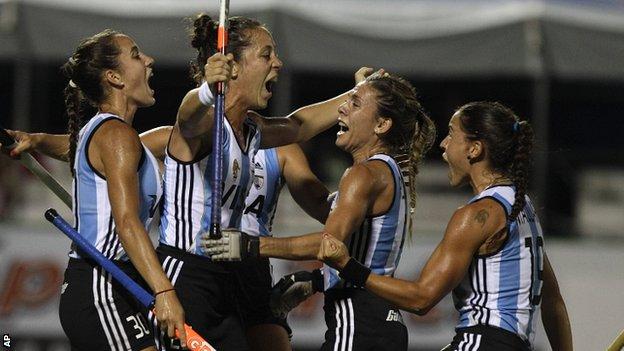 Great Britain's first appearance in a Champions Trophy final ended in a valiant 1-0 defeat against world champions and hosts Argentina.

The only goal came in the first half when Silvina D'Elia's penalty corner strike squeezed in, the only such set-piece GB conceded in the tournament.

Britain matched the favourites for much of the contest but despite a gritty display they had to settle for silver.

In the bronze medal match the Netherlands beat Germany 5-4.

Britain's impressive run into their first major final must give them encouragement ahead of this summer's Olympics on home soil.

There was a jubilant atmosphere at a packed Rosario stadium but the match began quietly, with Britain reducing the hosts to just a handful of penalty corners in the first 20 minutes.

Argentina captain Luciana Aymar was perhaps fortunate to escape with only a green card for a cynical challenge but the home side, currently ranked second in the world, began to show glimpses of attacking flair, Rocio Sanchez Moccia displaying some intricate stick work.

The British team valiantly soaked up the pressure and broke effectively when the industrious Laura Bartlett freed Nicola White, who cut inside but saw her goalbound shot blocked.

However the British defence was finally breached when D'Elia's shot bounced just in front of Beth Storry and went between the goalkeeper's feet into the net.

Argentina now have five Champions Trophy wins, and only Australia and the Netherlands with six apiece have more

Moments later Storry needed to be alert to advance off her line and block what looked to be a certain second.

Crista Cullen's low flick was heading for the corner but the Argentina defender on the post kept the ball out.

Having recovered from a 2-0 deficit to earn a draw against the world number one side the Netherlands in the pool matches, Britain retained a measured approach and created another opportunity following a fluent move spanning the length of the pitch.

But the finish could not match the approach play as an attempted reverse strike from White, well-placed inside the circle, made contact with fresh air rather than the ball.

As Argentina pressed for a decisive second, Aymar jinked her way through in mesmeric fashion along the byeline but could not find an end product, while Storry made a fine low diving save from a penalty corner.

The final chance for GB came following some neat control from Alex Danson on the left, but her cross-shot fizzed across the goal and out to safety, leaving the jubilant Argentina team to celebrate their fourth Champions Trophy success in the last five years.