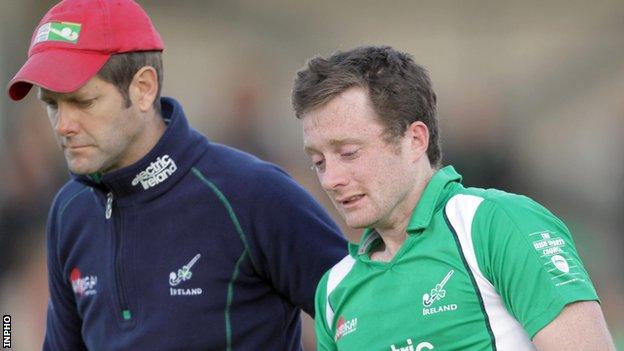 Ireland suffered a huge disappointment as they missed out on Olympic qualification as Korea hit a last-gasp winner in Sunday's clash in Dublin.

The Irish twice led through goals from Peter Caruth and Timmy Cockram but Korea levelled and then hit the winning goal with two seconds remaining.

It was a cruel finish for the hosts and a number of the Irish players were in tears after the 3-2 defeat.

Only one qualifying place for London 2012 was available at the tournament.

Caruth struck the Irish ahead in the 13th minute after a John Jermyn effort had been parried.

The Koreans levelled five minutes before half-time as Young Nam Lee danced his way through the Irish defence before slotting past David Harte.

Ireland pressed after the restart and Cockram slammed in a penalty corner with less than 20 minutes remaining.

However the lead lasted less than five minutes as Woo Hyun Ham netted from a penalty stroke.

Both sides had late half-chances with Mitch Darling just failing to get in a close-range shot with less than three minutes remaining.

Extra time looked certain as the clock counted down but Korea won a free deep in the Irish half in the closing seven seconds and Nam Young Lee got the final touch with the match officials confirming the winning goal after viewing the replay.

A clearly devastated Ireland coach Revington added that the defeat was "pretty difficult to take".

"These things happen in hockey unfortunately," said the South African.

The world-ranked 16th Irish had battled impressively to progress to the final and held their nerve to earn the draw that they needed in Saturday's game against Malaysia.

The Irish had drawn 1-1 against the sixth-ranked Koreans earlier in the tournament.