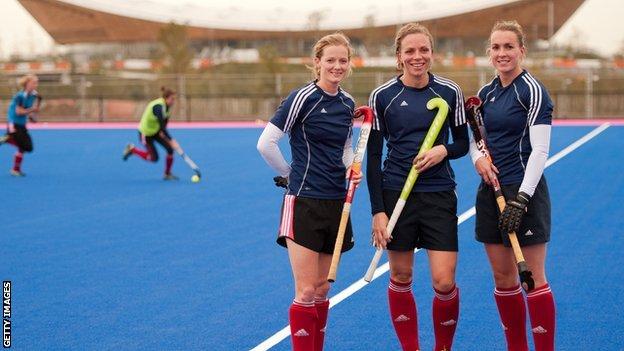 The 2015 European Hockey Championships are to take place at the Olympic Park in London.

It will be the first major international tournament to be staged there after the London 2012 Games.

The men's and women's winners will both be guaranteed a place at the 2016 Olympics in Brazil.

The permanent venues on the Olympic Park need to be used regularly, not just by the local community but also by elite sport as their construction intended, once the Games are over. Much effort had been made to put together a strategy that will help justify the Olympic costs by making East London a hub of major sporting and cultural events over the next decade and beyond. Hockey, it is hoped, is just the start.

"The England Hockey Board has been honest in its promise of a legacy to hockey," said European Hockey Federation president Marijke Fleuren.

The decision to stage the event at the Lee Valley Hockey Centre in the Olympic Park was taken at an EHF board meeting held in Bratislava, Slovakia, earlier this month.

"This success once again demonstrates our commitment to creating a lasting legacy for people to continue to enjoy playing, watching and volunteering in hockey in this country," said England Hockey Board chairman Philip Kimberley.

The successful bid was put together by the EHB with the support of London & Partners' and UK Sport's major event teams, together with the Olympic Park Legacy Company and Lee Valley Regional Park Authority.

Olympic Park Legacy Company chair Margaret Ford said: "In winning the right to host 2017 World Athletics Championships and now the EuroHockey Championships 2015, we are beginning to see the powerful draw that the park is having in attracting major events."