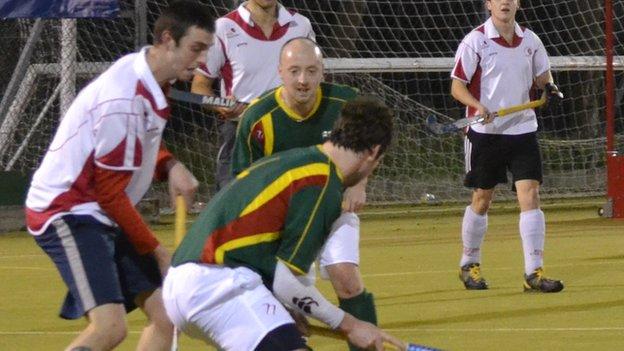 Guernsey's men are through to the final of the HA Trophy after a dramatic 3-2 win over West Hampstead in extra time.

Matt Watson scored a golden goal winner from a short corner with three minutes to go to seal a place in the final.

Guernsey were 2-0 down at half-time but fought back as skipper Andy Whalley pulled one back before Watson equalised with 15 minutes to go.

"If we play like we did in the second half we can beat any side on our day," Whalley told BBC Guernsey.

"They've got a very good side and are used to winning and they went at us from the start.

"I think we were a bit fazed and a bit shocked at the aggressive way that they played, but in the second half we came out a different side, we really dominated and we played some terrific hockey," he added.

The win secures a place in the final for Guernsey for the first time since 2009 where they will play Gateshead next month.