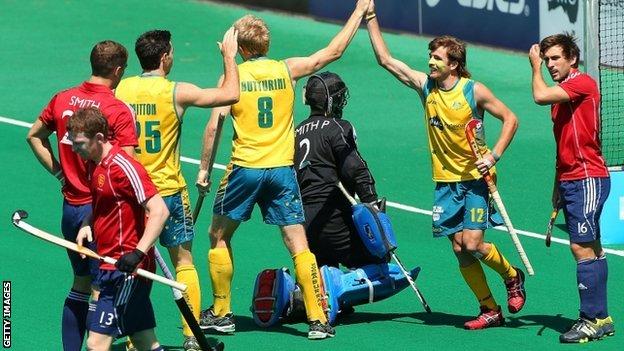 The new nine-a-side format sees smaller teams play on a full-size pitch with goals that are one metre wider.

Australia had beaten England 6-2 in Saturday's last round-robin match in Perth, and followed up with a 5-2 victory in Sunday's final.

Both teams now head to Melbourne for the 11-a-side Champions Trophy, which begins on 1 December.

England saw off India and Pakistan in their opening two matches at the nine-a-side tournament, which was played over two periods of 20 rather than 35 minutes in an attempt to create more goal-scoring opportunities.

"I'm really pleased with how the week has gone and I'm happy with how we've been progressing," coach Bobby Crutchley told England Hockey's website.

"We have learned a lot this week playing in some very hot conditions against the best in the world.

"Our new players have adapted well to the step up to international hockey and the wins against India and Pakistan were pleasing. It's been good preparation for the Champions Trophy."

England have taken a squad of 18 players to Australia, including six making their international debuts and five who were members of the Great Britain squad that finished fourth at London 2012.

They will play Olympic Champions Germany, New Zealand and India in their group in Melbourne.