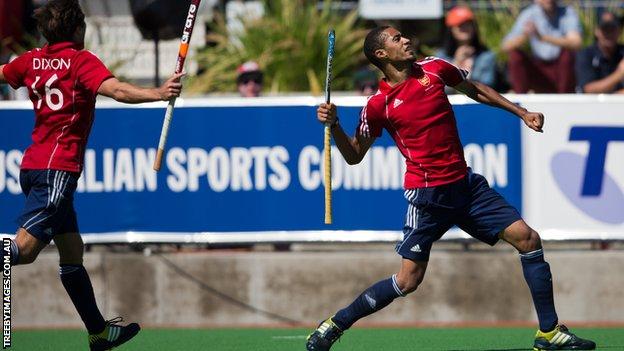 England's hockey team bounced back from the disappointment of Saturday's defeat by India with a 4-1 win over Olympic champions Germany in the Champions Trophy in Australia.

Adam Dixon opened the scoring when he converted Barry Middleton's cross, before team-mate Harry Martin dived in at the back post to make it 2-0.

Richard Smith put into his own net but Mats Grambusch did the same at the other end.

Several cards were issued during the match, including four greens, four yellows and a red card for Niklas Grell. The German pushed an England player for the second time in the contest and was shown a second yellow 15 minutes from time.

England had never before beaten Germany at the Champions Trophy and had only recorded three wins in their previous 20 attempts. Both teams were relatively inexperienced compared to their Olympic line-ups.

"We got our just desserts for sticking rigidly to a game plan," said England assistant coach Bobby Crutchley.

"While the Germans always looked dangerous going forward, I thought our defensive unit was excellent. We took our chances today and that made all the difference."

England's final Pool A match is against New Zealand on Tuesday. All sides are guaranteed to contest a quarter-final tie with the finishing positions in the pool determining the fixtures.