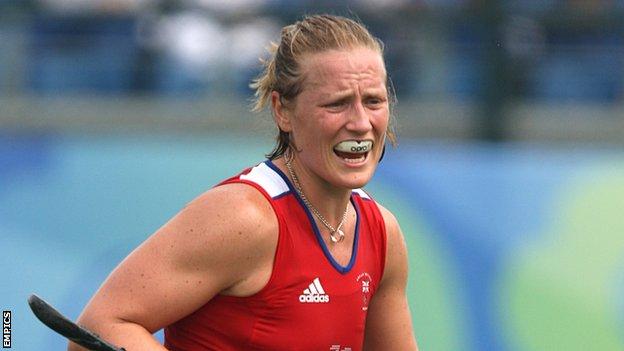 Canterbury defender Mel Clewlow sent a warning to their Premier Division rivals, insisting the table toppers are yet to hit top form.

The Polo Farm outfit enter the winter break a point clear of Leicester after their clash was frozen off on Saturday.

She told BBC Radio Kent: "Initially our aim was not to get relegated.

"We've surprised ourselves and others that going into Christmas we are sat top of the Premier League. We've stuttered along in 10 matches."

She added: "We've not even hit fifth gear yet. We're stuttering along in third.

After narrowly missing out on a place in Europe last season and losing to Leicester in the play-offs, Canterbury have won seven and drawn three of their opening ten fixtures in the new campaign.

The Kent side's effort is all the more impressive given that they have been without England internationals Dilly Newton and Natalie Seymour since the London 2012 Olympic Games.

They hope to have their pair back for the title push in the new year.

Clewlow, 36, is confident her side will be right in the mix come March.

"Our rival teams are only going to get stronger but I think there's enough points between ourselves and Reading to keep us in the play-offs," she said.

"We're desperate to get back into Europe and this year we've got a good blend of youth and experience.

"The likes of Grace Balsdon, Lucy Hyams and Eliza Brett are genuine England Under-21 players.

"They're no longer kids and they're having huge influences on the final outcome.

"If at the end of March, we can be where we are now, we'll have surprised a lot of people, our governing body included."