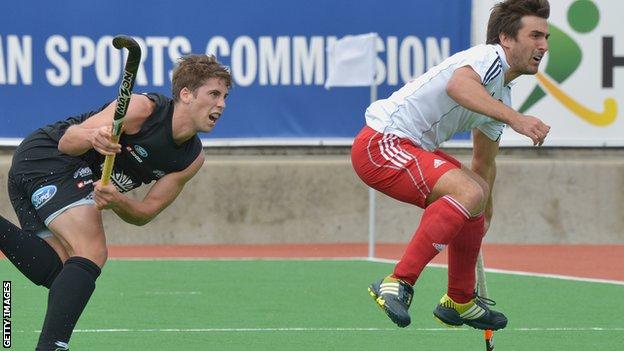 England's men will face hosts Australia in the quarter-finals of the Champions Trophy after a 1-1 draw with New Zealand in their final Pool A game.

The result meant England finished third in Pool A and will face Australia in Melbourne at 0900 GMT on Thursday.

Australia beat Pakistan 1-0 but finished second on goals scored in Pool B behind the Netherlands.

England had lost their opening game 3-1 to India on Saturday, but responded with a 4-1 victory over Olympic champions Germany the following day.

Against the Black Sticks on Tuesday, head coach Jason Lee was pleased with the way his side withstood the pressure as their opponents pressed for a late winner.

He said: "Overall, it was a completely different style of hockey to the first two games and we did well to stay in the game, although I felt we actually had enough chances of our own to have won."

India won Pool A despite losing their final match 3-2 to Germany, while the Dutch beat Belgium 5-4 in a dramatic match to win Pool B.

The Champions Trophy is played annually and features eight of the world's leading hockey nations. The teams are split into two pools of four but all of them go through to the quarter-finals, with the final positions in each group determining the fixtures.

It means that even though New Zealand finished bottom of their group without a victory, they remain in the tournament and will play the Netherlands on Thursday.