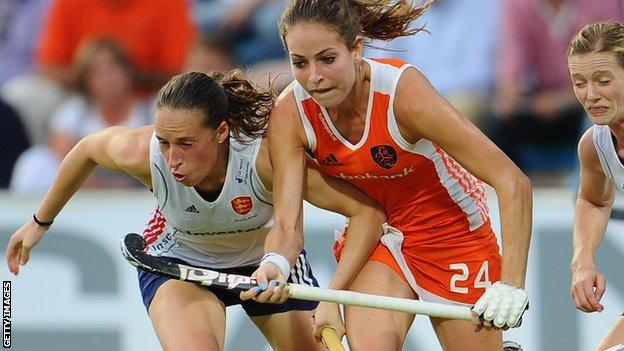 Canterbury and England midfielder Susannah Townsend has revealed how her dissertation is helping her overcome missing selection for London 2012.

Townsend was overlooked by Great Britain coach Danny Kerry when he named his final women's squad of 16 for this summer's Games.

I've never liked talking about how I feel. I originally found it hard to do. I didn't know what to say

And she is now seeing a psychologist provided by GB Hockey and using the sessions to provide material for her research project on "the emotional impact of not being selected for an Olympic Games", with the approval of the University of Kent.

Talking about her feelings did not come naturally to 23-year-old Townsend, who is also analysing the effects of non-selection on other athletes.

One of the positive strides she has made so far is an awareness of the need to control her temper.

"Traditionally, I get angry," she told BBC Radio Kent. "In Canterbury games, I'd get sent off [sin binned] then come on and score two goals.

"It's working out how much anger I need. Sometimes people look at me and think I look very relaxed and take that the wrong way.

"It's for me to work out the way I have to perform on the pitch in training and the game."

It seems to be working for the midfielder, who has helped her club side reach the top of the English Premier Division this season.

The Polo Farm outfit have been without internationals Dilly Newton and Natalie Seymour, who opted to take time away from the sport after also failing to make the Olympics.

For Townsend, the intrinsic motivation, with the help of the psychologist, is to turn negative experiences into a positive one, even though initially, she did not find it easy.

"You get over stuff like that and as clichéd as it sounds, it does make you stronger," she said.

"I've never liked talking about how I feel. I originally found it hard to do. I didn't know what to say.

"If you mis-trap a ball on the pitch, how do you get over that and not hide? How do you turn that into making the next touch a good touch?

"It's simple stuff but a lot of players make that mistake and hide. It's working out what you have to do to not let mistakes or selection get to you.

"That side is very important and we're lucky that we have those resources to use as much as we like."

Townsend has made five appearances for England but is still awaiting her first cap for Great Britain.

The former Sutton Valance schoolgirl watched from the sidelines as Team GB recovered from a semi-final defeat at London 2012 to win a bronze medal.

She believes overcoming adversity was a trait every GB player possessed - and explains how they were able to put the initial disappointment of failing to reach the final behind them so quickly.

"You see some of your best friends on the pitch, distraught and crying their eyes out," she added.

"Their aim was gold but they managed to come back.

"The psychology and strength and conditioning work all contributed to winning that bronze medal."

Townsend's next goal is cementing a place in the England and Great Britain sides ahead of Rio 2016 and drew inspiration from Olympians and Paralympians she met at a Kent Sporting Legends event last week.

"I hadn't really thought about the Olympics much, up until watching the montages. I was thinking I really did miss out," she added.

"Will Bayley, who won a table tennis silver medal, said he came away from it [London 2012] disappointed, so he's looking forward to Rio.

"He's looking to the next Olympics, just like me."