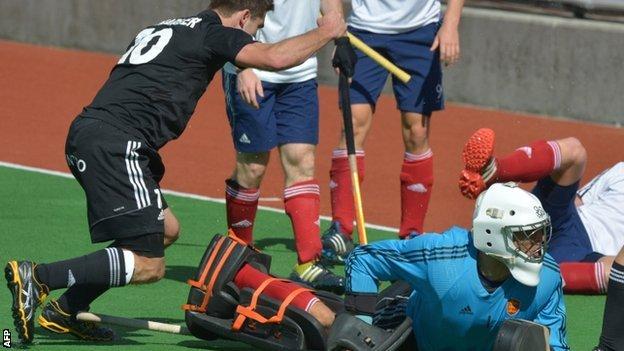 England's men were beaten 4-0 by Belgium in their first Champions Trophy classification match in Melbourne.

Jason Lee's inexperienced side held their own for much of the first half, but fell behind to Jerome Truyens' goal in the 27th minute.

England, who lost their quarter-final to Australia, will play New Zealand for seventh place at 21:30 GMT on Saturday.

Australia will go for a fifth consecutive Champions Trophy win when they take on the Netherlands in the final, after the hosts saw off India 3-0 and the Dutch beat Pakistan 5-2.

Lee's England side started brightly against Belgium but failed to convert two penalty corners and, as the match wore on, tiredness set in - it was their ninth match in 15 days.

England thought they had cancelled out Truyens' early goal through Simon Egerton with 20 remaining, but the ball was ruled to have come back out off the post.

The match then turned, with Belgium countering and scoring three goals in quick succession to progress to the play-off for fifth place.

Lee said: "I was pleased with the performance in the first 20 to 25 minutes but we failed to capitalise on our chances in that spell.

"In the second half it was clear to see us starting to tire as we reach the end of what has been a long trip."

The Champions Trophy is played annually and features eight of the world's leading hockey nations.