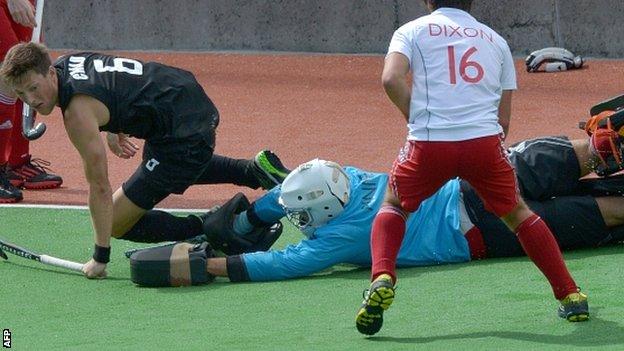 England finished eighth and last in the annual Champions Trophy after losing to New Zealand on the golden goal rule in the play-off for seventh place.

The match finished 2-2 after 70 minutes in Melbourne, Stephen Jenness putting the Kiwis ahead but Darren Cheesman making it 1-1 at half-time.

Wilson was well placed at the back post to touch in the winner in extra time.

Australia, who beat England in the quarter-finals, secured their fifth successive Champions Trophy title by coming from a goal down to beat the Netherlands 2-1 in the final, Russell Ford and Keiran Govers their goalscorers.

England, ranked fourth in the world, had lacking most of the players who represented Great Britain at London 2012.

A defeat against Belgium in their first classification match had ensured that, as one of the bottom three teams, England will be relegated to the Champions Challenge level and not guaranteed a place in next year's Trophy.

Head coach Jason Lee admitted the event had been a tough learning curve for his team, saying: "International hockey players a not made overnight. It's about experiencing these sorts of tournaments.

"I'm impressed with the way some of the new guys have acquitted themselves but as a team we are not physically ready for a tournament such as this. There are definitely some green shoots but there is plenty of work ahead of us."

England goalkeeper George Pinner had already made several fine saves by the time Jenness opened the scoring for New Zealand, latching onto a misplaced Nick Catlin pass and converting inside the near post after good combination play with Phil Burrows.

Simon Egerton saw a penalty corner saved but England were level shortly before the break as the heavily outnumbered Cheesman displayed great strength to turn and sweep the ball home.

Neither side could establish command in the second period but England edged ahead as Ollie Willars found space and Middleton diverted his pass into the net from close range.

The lead lasted only five minutes as Wilson connected perfectly with an upright backhanded shot that flew in to make it 2-2.

Pinner saved a late penalty corner to take the match into extra time, but Wilson sealed it by converting another set-piece.