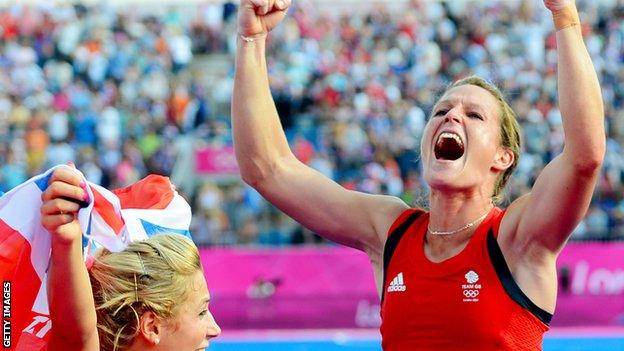 Goalkeeper Storry, 34, and penalty corner specialist Cullen, 27, were part of the GB squad that finished third at London 2012.

Cullen said: "Together as a united squad we were able to be part of something amazing, of which I am very proud and will remember fondly."

She finished joint top scorer with four goals as Great Britain claimed a bronze medal in London - only the second time the women's hockey team have won an Olympic medal.

Her last appearance was against New Zealand, when she scored to help GB to a 3-1 win and a podium finish. She made 171 international appearances and scored 56 goals.

Cullen has returned to Kenya, where she spent a lot of her childhood. She will work for a leading security company and will also work to protect elephants from the underground ivory trade.

Storry is also a double Olympian and was capped 115 times for her country. The Reading-born stopper was named in the 2010 World All-Stars Team.

She told BBC Radio Berkshire: "It just feels like the right time. The age part is a factor - I have noticed in the past few years, my body has been hurting more and more. But it is also about finishing on high. London was such an incredible experience I just think it is a great time to stop and enjoy what has been."

Storry will continue to play hockey for Amsterdam H&BC, where she has moved to from Investec Women's Hockey League club Reading.

Hawes represented GB men at the London Olympics, as the team finished fourth after losing to Australia in the bronze-medal match. That was his third Olympic Games and he previously captained the side to fifth place at the Beijing Olympics in 2008.

The Brighton-born player will resume his career in the hotel industry and will continue to serve on the British Olympic Association's Athletes' Commission.

Hawes said: "While I leave the international game with regrets over the way things finished in London, I am able to appreciate my time as an international player."

Forbes, 34, won 10 caps for England and Great Britain after making his debut for England in 2011. The defender holds dual nationality and previously played international hockey for South Africa, competing at the Commonwealth Games in 2006.