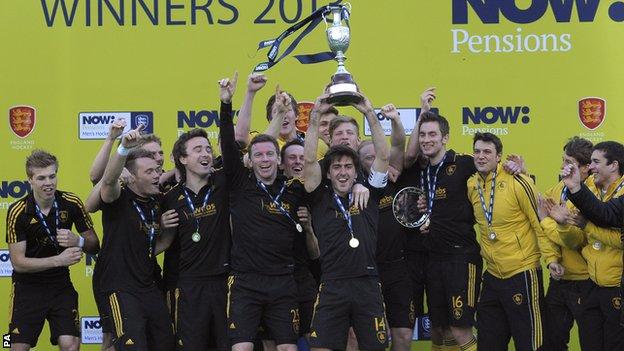 Beeston lifted the top trophy in men's domestic hockey with a 5-1 win over Surbiton in Reading on Sunday.

The Nottinghamshire club claimed the NOW: Pensions Championship by finishing 11 points clear at the top of the Premier Division.

Beeston reached the play-off final after a sudden death penalty shuffle against Reading in the semi-final.

"Surbiton have been the in-form team since Christmas so we knew it would be tough," said goalkeeper George Pinner.

"But we played well and it's great to come through with victory and take the title."

Martin Jones, Ollie Willars, Craig Boyne (2) and Simon Egerton scored for Beeston, while James Tindall replied for Surbiton, who had finished second in the league table.