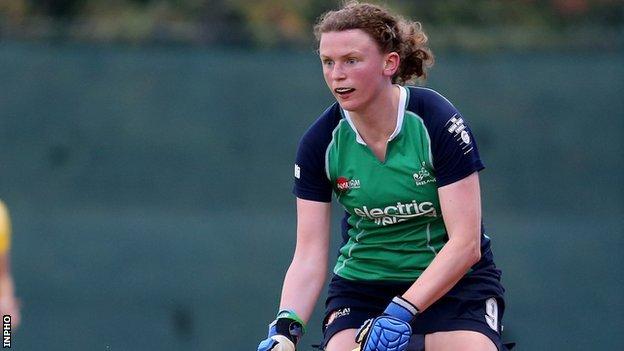 The Ireland women's hockey team made it two wins out of two in their three-match series against Scotland with a 2-0 victory at Mossley on Thursday.

After a scoreless first half in which Scotland were unable to convert some good chances, Anna O'Flanagan and Megan Frazer scored goals in the second half.

Ireland had beaten the Scots 4-1 in Tuesday's first game between the sides, having drawn 1-1 with Wales on Monday.

Ireland and Scotland will play their third game at 12:00 BST on Friday.

Alex Speers, who celebrated her 150th cap against Wales, scored a double in Tuesday's comprehensive success over Scotland.

Both goals came in the first half, in which the Scots replied courtesy of an own goal.

Ireland drew 1-1 with Wales on Monday, Katherine Budd converting a late penalty corner to earn Wales a share of the spoils.

Ireland had taken the lead with 13 minutes left when Nikki Evans touched home from close-range following a pass by Naomi Carroll.

The fixtures are part of the Irish side's build-up to the European Championships in August, where they will face Belarus, the Netherlands and Belgium.